The Mental Fountain—Working with Thoughts in Meditation 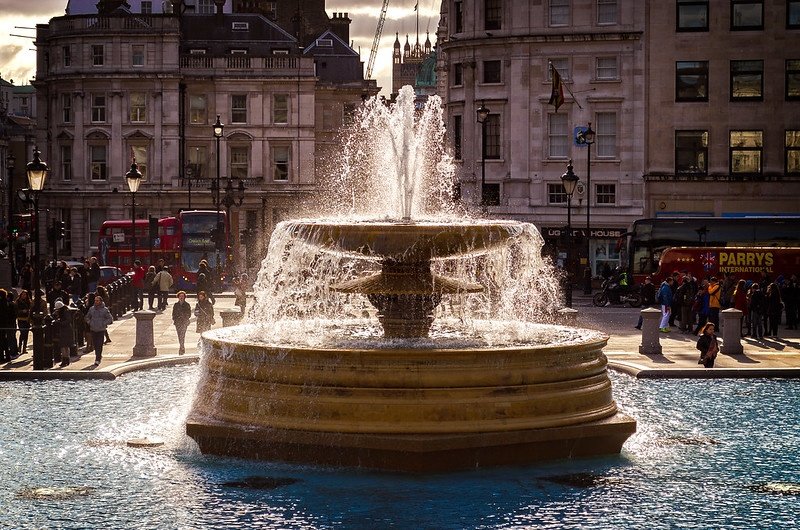 I first got involved in meditation because my brain hurt. As a teenage Monty Python fan, that’s how I described it at the time. What I meant was that the experience of my mind thinking was actually a kind of torment for me. Either my thoughts were unpleasant, which I didn’t like, or my thoughts would just keep repeating, over and over, which I didn’t like either. Even when there were positive thoughts that felt good, there were other thoughts about that experience, which sort of brought it down.

All this painful mental chatter caused me a lot of suffering back then. So I started meditating, and found that it quieted my mind down some, and relieved this pain quite a bit. After that, I was hooked. I started meditating a lot, which was a very positive development in my life. Over time however, I developed a habit of assuming that the deeper my meditation was, the less chatter there would be in my head. In other words, it was a direct relationship: quieter mind equals deeper meditation. Or even more strongly put: the goal of meditation was to make my mind shut up so there would be no thoughts in meditation at all.

There is a lot of external support for this viewpoint. For example, Patanjali’s Yoga Sutras say that yoga involves the “cessation of the turnings of the mind-stuff.” Many people interpret this rather occult-sounding sentence to mean “cessation of thinking.” You will find no end of gurus, spiritual teachers, as well as texts claiming that the goal of meditation is to stop thinking. (For the record, I believe that Patanjali is referring to something else in the quote above, specifically nirodha, or a complete experience of cessation of experience—which is something quite a bit more deep and intense than a merely quiet mind.)

I was already inclined against thinking, so when I was inculcated into this anti-thinking viewpoint, I took to it enthusiastically. When my mind was silent in meditation, I was happy. When mental chatter was present, it bummed me out. This negative emotional stance towards thinking, though, even made the times when my mind actually was silent fraught, because I’d find myself worried that I might start thinking again. And, voilà, there I was, thinking again. So it was difficult to even enjoy the silence (unless it was very deep) due to anxiety that it might vanish.

Thinking Is Just What the Mind Does

After three decades of meditation practice, however, I no longer believe that the goal is to stop thinking. In fact, these days, I feel like the more thinking going on in my brain, the better. It’s just more fuel for the fire of meditation. In my experience it’s entirely possible to have an utterly deep and satisfying experience of meditation while having a mind positively racing with thoughts. But how is that possible?

I have done very long, silent retreats in the woods, and under those conditions—with food, shelter, and safety assured, and with enforced quiet and almost no interactions with others—the brain does indeed become very quiet most of the time. However it’s ridiculous to imagine that your mind would be silent under the normal conditions of modern society. With so many complex situations to navigate, people to talk to, relationships to have, taxes to do, and work to accomplish, it’s not only reasonable but very advantageous to have the brain thinking overtly much of the time.

Your lungs breathe. Your stomach digests. Your kidneys filter. And your brain thinks. That is what evolution “designed” it to do (unintentionally, of course). Although having a quiet mind is pleasant and restful, it’s not exactly natural in the high-intensity environment most of us currently live in. The world is a very complex place, and there is a lot going on all the time. It requires that we think to get by. That activity isn’t going to just switch off suddenly when you sit down to meditate.

So are we doomed to have a head full of obnoxious mental noise at all times? Well, the thinking may be there most of the time, but you don’t have to experience it as a problem. There are several strategies that can literally turn the busy mind itself into the object of high concentration. Many meditation traditions have some form of this practice, often called something like “taking the mind as the path.” The one we’ll look at here is called “flow and go.”

The idea is to take the complex activity of the mind and reduce it to something that is easy and manageable to meditate upon. To do that, you track thinking as waves of mental activity, rather than as specific content. When any thought happens, you notice it arising, changing, and dying away. Beginning, middle, and end. Watching it arise and change is the “flow” part. Watching it wink out of existence is the “go” part. Go is short for “gone.”

Observing the beginnings of thoughts is relatively easy. We do it all day long. Observing them as they change, flow, morph, transmogrify, and unspool is also relatively effortless. Following them all the way to the point where they wink out of existence is more of a challenge, because we typically direct our attention to new thoughts rather than watching old thoughts disappear. But in this technique, noticing the moment of vanishing is very important.

It’s also challenging to keep observing the thoughts rather than participating in them. That’s because the ego of an adult human is centered in the thinking process. We believe that we literally are our thoughts. Just a short time of doing this meditation practice will convince you otherwise, because if you maintain viewership of your thinking for a while, it becomes intuitively obvious that you are not the thinking. So it’s important to not let yourself get caught in the content of the thoughts, but rather to let them just be some sound and image activity in your mind. Lights and sounds that are arising, changing, and vanishing again. Flow and go.

The essence of this technique is to not fight or control the thoughts in any way. Do not distinguish between good and bad thoughts. Let all thoughts arise completely unimpeded, and great all of them with equal openness and matter-of-factness. At the same time, do not get involved in the content of the thoughts. Instead, it is important to closely track the movement of the thoughts through awareness. That’s crucial. You don’t pay attention to what the thoughts are about, but simply their activity of arising, changing, and vanishing.

What’s Wrong with Thoughts in Meditation?

This practice leads to several helpful insights. One is that you realize that you are not your thoughts. This in itself is worth the price of admission. Most of the pain of unpleasant thinking is due to the fact that we believe that we literally are those concepts. When your thoughts are no longer your identity, you experience much greater ease and freedom.

Another insight is that thoughts appear to just happen by themselves, without any volition on your part. They are a natural activity, like a rainstorm or a river. The brain, like your other internal organs, just keeps chugging along without any conscious effort on your part. As you sink more deeply into the experience of flow and go in thinking, you will begin to get the sense that the mind is (metaphorically) a sort of fountain of sounds and lights, talking and images, that continuously bubbles forth. A natural spring, flowing with lightness and ease. The movement of thought activity is pleasant, regardless of the content of the thoughts. At this point thinking feels almost like a physical body sensation, one that is warm and pleasant, almost like it’s giving you a massage from within.

Paradoxically, you may also find a tremendous amount of relief in the vanishing of each thought. And if you continuously follow the flow of thoughts to its vanishing point, it will eventually lead to the biggest insight of all—cessation—which is what Patanjali was talking about.

So the next time you find yourself in a war with your own mind—either hating your own thoughts or upset that your mind is not quiet in meditation—try calling off the conflict. Instead, focus on the flow and go of thought activity in the mind. You may come to relish the spontaneous bubbling of the mental fountain.

Try this “do nothing” meditation