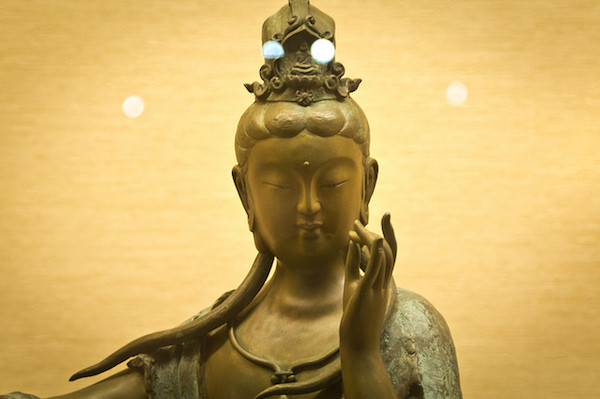 The sages of many spiritual traditions have said that the highest state of spiritual awakening is already present in each human being. Total enlightenment has always been there, is there now, deep down at the base of each mind. In Buddhism this is referred to as the Buddha Nature, or Rigpa, in Hinduism it is called the True Self.

It’s funny that most meditation techniques focus on cultivating some special state that wasn’t there before the meditation, and which fades away after the meditation. If true awakening is present all the time, shouldn’t it be possible to just notice it without trying to induce a special state? Shouldn’t you just be able to see it directly?

Doing Nothing — How Does that Work?

Here is a meditation technique that does just that. I call it the “Do Nothing” technique (which is the name given to it by meditation teacher Shinzen Young), but the same method (or something quite similar) is called shikantaza (“just sitting”) in Zen Buddhism, dzogchen in Tibetan Buddhism, and is practiced in Advaita Vedanta (nondual Hinduism) as well. The famous teacher Krishnamurti called it “choiceless awareness.”

The core idea of this practice is that while, yes, total awakening is already present in your mind at every moment, we often have trouble noticing it or contacting it (to say the least). One of the main blockages or obscurations that gets in the way is the sense of being a doer. Doership is the core of the sense of self, the heart of the ego. When you let go of the sense of effort, the sense of trying, the sense of choosing and doing, then there is a corresponding relaxing and diminishment of the ego.

That is, by sitting and intentionally doing nothing for long enough, we eventually starve the ego of its juice, and something very different begins to shine through.

This idea is thousands of years old, what does science have to say?

The Neuroscience of Doing Nothing

There is some very interesting recent neuroscience that backs this idea up. The posterior cingulate cortex (PCC) is a brain structure that is a major player in the default mode network (DMN). The default mode network is active whenever we are not engaged in a particular task, and usually thinking about ourselves. One major study showed that DMN activity is strongly correlated with negative affect, meaning that this preoccupation with the self makes you feel bad.

FMRI brain scans show, however, that the activity of the PCC decreases when we let go of the feeling of doing anything. The more it feels like things are just effortlessly happening, the more your default mode network slows down, which is great for feeling good.

In fact, this feeling of letting go and allowing everything to just effortlessly unfold is one of the hallmarks of the flow state, or a peak experience. Most peak experiences only happen with something that we’ve been practicing for years, and has become so automatic that it seems effortless. But you can touch a flow state relatively quickly and easily: it’s one of the Do Nothing meditation benefits.

And if it goes very well you may begin to notice your already-awakened mind, at least a little bit.

Do Nothing Meditation Technique

The full instructions for the Do Nothing meditation technique are: sit down and do nothing.

That’s it. Sit down and quite intentionally do nothing at all. Now keep on doing it.

However, most people need a little more instruction than that, so let’s unpack it a bit. Even though the meditation is called Do Nothing, you’re actually doing a little tiny bit of something: you’re paying attention to the feeling of doing something.

It doesn’t matter where your mind goes. It can go to all sorts of distraction, and that’s fine. You are not trying to meditate, focus, or concentrate in any way.

You’re simply noticing when you feel that you’re doing something and letting go of that.

If it feels like you’re getting caught up in a thought, let go of that. Don’t just sit there following thoughts, planning, evaluating, etc. That is considered to be doing something. Just let go of doingt hat.

If it feels like you’re getting caught up in an emotion, let go of that.

If it feels like you’re getting caught up in meditating, let go of that.

If it feels like you’re struggling to let go, let go of that.

If it feels like you’re constricting or tightening in your body, your emotions, or your mind, let go of that.

Just keep relaxing away from all tightening, constriction, or sense that you’re doing anything.

(Don’t) do this meditation for as long as you’d like. Make sure your awareness is bright and you are not fading or sleepy. Eventually the mind feels very spacious, open, and relaxed, but also bright, clear, and vivid.

Important Note: Over time I’ve noticed that English speakers have two ways of understanding the verb “to let go.” One meaning is “to release.” The second meaning is “to get rid of” or “to push away.” Notice that the first of these is effortless, while the second implies a lot of effort. When I write “let go of that,” I’m talking about effortlessly releasing. You’re not trying to get rid of something, pushing anything away, or making a big effort.

What to Do If It’s Really Not Working

Sometimes, Doing Nothing results in nothing more than sitting there thinking about fights you’ve recently had at work, or getting really sleepy. These sorts of experiences are normal some of the time, and something we let go of in this practice. However, if you’re spending a majority of your time in each meditation period just thinking or falling asleep, then it’s time to back up a bit and take some steps to help.

The most basic fix is to spend ten minutes or so focusing on breathing. You want to get a bit concentrated and more relaxed. Just a little bit of stability and focus in the mind will allow you to then go back to the Do Nothing practice with more confidence.

If you keep falling into drowsiness, then sit with your eyes a little bit open and unfocused. You’re not trying to stare at anything, but just to let some light in. If you’re still drowsy after that, sit up very straight. If you’re still snoozy after that, the meditate standing up. Still tired? You need some sleep!

Do Nothing Meditation Benefits

The Do Nothing Meditation is both easier and harder than it sounds. If you practice it often, you’ll find something very deep within you relaxing and opening to the natural flow of experience. And that’s how you find awakening by doing absolutely nothing.

Here is a video of teacher Shinzen Young talking about the Do Nothing technique.

Downtime for the Stone Age Brain

Five Reasons We Should All Learn to Do Nothing (Guardian article)

Read more about nonduality on Deconstructing Yourself

26 thoughts on “Do Nothing Meditation”