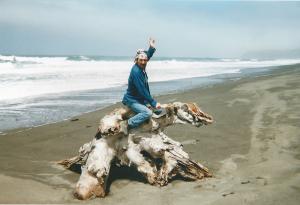 Last month my dad would have been 55 years old. With his birthday coming up I thought it was high time I got back to my Dying with Dad series. It’s been challenging to write about my dad’s death and relationship with him. It such a personal thing to throw out into the online world, even though the Internet is full of personal things. I know what my Facebook friends had for breakfast, details of their breakups, and how much they love animals or hate Romney. There are many blogs that give painfully honest accounts of what it is to be human. Still, each time I push the publish button on a Dying with Dad article I feel exposed and a little embarrassed. It’s not just me I am exposing; I’m also exposing my dad.

Right now I feel a lot of resistance to going in to the memories of my dad’s final months. Once I access them, the stories tell themselves, but it takes a certain willingness to go there. Through meditation I’ve learned how to go to the difficult places. I’ve also learned how to stop pushing, take it easy on myself, and let things unfold naturally. I don’t think my dad had either of these skills. He didn’t know how to work with or even access many parts of himself. He could wallow in past disappointments and resentments, but to actually open up to the core issues and begin to unravel them was not possible for him. Because of all his unexamined trauma and suffering, he lived in a constant state of stress. The only time he could take it easy was when he was drunk; othertimes he was always pushing. I believe that it wasn’t just smoking and drinking that caused the cancer. It was also the many years of stress and repressed emotion. I have those tendencies inside of me too, and I continue to work through them with my practice.

My dad had had a lot of resistance to going into the memories of his own parent’s deaths too. I don’t remember ever having a real conversation about his mother’s death. She died when he was only 16. I’m not entirely sure of the circumstances, but she had a history of drug abuse. I learned from my mom that he didn’t visit her in the hospital before she died and that he carried great guilt about that. I’m sure at sixteen it was too much for him, he was already drinking everyday and even shooting heroin, trying to avoid the pain of living. I, too, went through a period of time when I didn’t want to see my dad anymore. I understand not wanting to face something like that. The difference between us was that I had already started on a path towards acceptance. My meditation practice made it impossible to push the feelings down, and eventually I knew the right thing for me was to be with him. I’m really grateful for that.

My dad had a huge amount of resistance to the fact that he was dying. He didn’t want to accept hospice or to let us care for him at home. Once he accepted the inevitable, the first thing he wanted to do when we left the hospital was go to the mall and buy a new pair of sneakers. He had clipped a picture from the newspaper of a pair that was on sale. They were puffy, blue and gray running shoes. It was certain that he would have no need for new shoes, but of course we took him. While he was trying them on, his feeding tube leaked yellow liquid on the shoe store carpet. I didn’t tell him. He could barely walk, but he clutched that box, almost proudly, as we slowly made our way back to the car. My dad wore them a few times when he went outside to smoke and take a walk. After he died my stepfather inherited them.

After that, there were no more shopping trips, but he had yet to acknowledge his looming death to me. He couldn’t talk easily and was heavily medicated, but he spent many hours awake. When he did sleep it was often restless and strained. He watched and re-watched Unforgiven and Legally Blond, while we cared for him and visitors came in and out. Soon after he came home we had a big party for him. All his old friends came, most of which had distanced themselves years earlier because of his drinking. It was a really special night. We had a big bonfire and rolled him up to it in his wheelchair. He kept telling his friends that he was “hanging in there” and “trying to get better.” One look at him told them that he wouldn’t be getting better, but they still encouraged and supported him.

I think we all wished he would have “the talk.” The one about how much he loved us and wished he wasn’t leaving us. He wasn’t crying at all, which was unusual because my dad had always been a very emotional guy. I’d seen him cry many times, but his resistance to what was happening wouldn’t allow for that now. Between the excessive pain medication and his denial, I felt a longing for connection with my dad. My practice helps me to find connection with everyone, regardless of the situation, but I have to admit that I wanted it to be more reciprocal. I wanted the chance to say goodbye and for him to say it back.

Not long after the party Cindy Snake Dancer came to see us. While my dad was still in the hospital my mom jokingly asked him if he wanted to see a priest. Not being a religious man at all, he said, “No.” Then she went though a list of possible spiritual advisors for him. When she suggested a witch doctor his answer was an enthusiastic Yes. She searched in vain for a witch doctor, and eventually settled instead for a Native American shaman woman named Cindy Snake Dancer. My dad was one quarter Cherokee, and proud of it, so a Native American shaman seemed appropriate. We all decided to chip in and hire Cindy to come over to perform a traditional ceremony for him.

In my spiritual quest I’ve leaned more to the scientific side of the street. I’m not usually into astrology, tarot cards, or angels. I’ve had some incredibly wild experiences with meditation, surpassing any of my drug-induced states, but I have chalked that up to mental images, mental talk, and physical sensations—the components of the self—nothing more. Even so, I was all for having the shaman woman come over. While my methods may not be all that mystical, I do my best to remain open minded to other ways of exploring the mystery of life and spirituality. As it turned out Cindy Snake Dancer was just what my dad needed.

The ceremony lasted for about 90 minutes, and included drumming, passing a sacred pipe, prayer, and a snake tooth. It was really incredible to combine mindfulness with the shamanic traditions of the Native Americans. In fact, when I was back in Los Angeles I joined my teacher Shinzen Young (who is very involved with a Native American community there) for a sweat lodge. I attended several more and found them to be deeply transformative.

During the drumming ceremony my dad fell into a deep and relaxed sleep. We continued the ceremony as he slept, his face was so soft and his breath was less labored than usual.  His body seemed let go of all that tension; tension that had been with him for many years. It was a powerful, intimate, and emotional experience for all of us. I think we all slept well that night.

What happened the next morning was something none of us expected. As soon my dad woke up he started calling for me and my sisters. With more strength than he had shown for weeks, he pulled us all on to his bed in a group embrace. He began to sob, and kept crying in as full and open a way as I’ve seen anyone cry. As his tears fell he told us how much he loved us and how much he didn’t want to leave us. He told us that he was afraid, and that he felt terrible about the grief his death would cause. We hugged him for a long time. I remember thinking his tears were so wet, so real, so alive.

In the next few days I had some incredibly deep meditations. I felt spiritually supercharged. I also felt closer to my dad, more connected. The experience with Cindy Snake Dancer was a real turning point for my dad. His resistance started to loosen up, and he was able to say goodbye.

The main thing that keeps me moving through my resistance and writing these pieces is the responses I get from my readers. My willingness to be exposed helps and inspires other people and this is no small thing to me. Being a wounded healer of sorts involves going into some dark places and meditation makes that possible. But resistance can be strong and sometimes I need more than just my practice. Therapists, body workers, and healers like Cindy Snake Dancer can be a great compliment to mindfulness.

It’s not easy to write about my dad, but it feels like the right thing to do. This writing has been very healing and freeing for me. Just like in my practice, working though the tough stuff is incredibly rewarding. And I do think my dad would get a kick out of being the star of this series.