It was my dad’s birthday recently. He would have been 54 years old. Most people think that he died pretty young, but it’s amazing he lived that long, given his lifestyle. I could have easily died much earlier too. My Dad and I were very similar. I remember my aunt calling me when I was about 15, crying, saying that she was waiting to hear that I’d been found dead in a ditch.

Her fear was not unfounded. I had been living a very unconscious and often very dangerous life. I think I was just trying to find some comfort, but the ways I went about it led to more discomfort. It wasn’t until I found meditation that I learned the trick of being comfortable with being uncomfortable. Meditation has also given me an appreciation of life. Now I don’t want to engage in anything that depletes my joy for living. Spending so much time paying attention to body sensations has also given me genuine wonder for the amazing piece of work this human body is.

When I think back at the way I treated myself before I had any spiritual life or a daily practice, I shudder. I could have easily taken the same path my dad did. He had a deep love of life, but his actions didn’t match up with that. He had no way of stepping back and viewing himself objectively. He was stuck in his addictions, fears and regrets. Even though his generation was a big fan of “consciousness,” he had very little of it when it came to his own experience.

When I think back, it’s funny how concerned my father was to keep me away from any activity that could possibly maim or kill me. That’s funny because the most dangerous activity was probably being around my dad, who was a practicing drunk driver until I was fourteen. All his worries about me and my sisters when it came to motorcycles, pedestrian safety, and swimming didn’t seem to transfer to concern out his own dangerous habit.

I remember one time in particular when he and his best friend Richard were taking us home after a concert. They were both blackout drunk and it was a rainy, East Coast winter night on winding, unlit streets. I was about nine and was sitting between my sisters, both of who are younger than me. My dad was at the wheel and the car was skidding all over the road, slowing down, speeding up. They decided that because Richard was less drunk, they should switch places, which then did while still driving. Somehow they accomplished this without crashing. I remember my hair being in my face, but I don’t remember crying. I just clutched my sisters close, and did my best to go numb.

Eventually he went to jail for DUI and was confined to a bike or public transportation for two years. When he got his license back he still drove with a beer between his legs, but he was careful to stay below the legal limit.

I always swore that I’d never drink and drive, but that seemed to be the only option when I finally got my license at 23. That was only one of the promises to myself that I broke. These days, I don’t tend to make promises to myself; I just do my best to stay present and mindful. By doing that, I don’t find myself drunk behind the wheel anymore.

For all the times my dad drove drunk with me in the car, there must have been many more times on his own. I hoped that after he stopped driving under the influence he would be safe, but drunk biking and walking can be hazardous too. After I moved to Los Angeles, I got several calls that he had fallen off his bike and busted his head open, or had woken up in the snow bleeding, with his wallet stolen. His reckless behavior even continued after he was diagnosed with cancer. The day of his first surgery, which was on his mouth and throat, he came home and drank beer and smoked Marlboros.

I understand that. I couldn’t tolerate any emotional or physical pain either. I was the queen of over-medicating. If I had a cavity filled, I’d need Percocet and Valium. I’d beat up my body up in all kinds of ways; get sick, and then drink and chain smoke to try to cheer myself up. It’s so different today. Being sick or injured isn’t fun, but I always try to use it as an opportunity to practice. Getting mindful about the sensations of a cold can be quite interesting. Exploring the emotions and thoughts about an injury can quickly show me the difference between pain and suffering.

When I arrived in Philadelphia to help care for my dad it quickly became clear that it was time for Hospice to get involved. He was so underweight that his tailbone had become an actual tail. He looked like a very, very skinny zombie. Like something off of the Walking Dead. More chemo or radiation therapy was out of the question. He could no longer eat without a feeding tube and he could barely speak. Everyone knew that he wasn’t going to pull though: everyone but him. He was convinced that things were going to improve.

My sisters and I began the process of helping my dad leave the hospital and move into my mother and stepfather’s house. This was not an easy feat. My dad was hell bent on staying alive and the word Hospice didn’t sit well with him at all. At that point he wouldn’t sign the “Do Not Resuscitate” order, even at the request of all his doctors. This is when freakout moment number two happened.

In an attempt to encourage him, I asked a doctor to give it to my dad straight, no sugar coating. I felt this was important for my dad to hear, in order to move on to the next phase. It seemed imperative to get him out of the sterile hospital environment and closer to my sisters and I. When the doctor told my dad that he could have as little as two weeks to live, my dad turned quickly to me with a look that is hard to put into words. Shock. Panic. Disbelief. It was such a short moment, but it seemed to last for ages. Part of me felt like that nine-year-old kid in the back of the car, trying to hold it all together. I wanted to shut down completely, go into that numbed-out state I learned as a child. I was freaking out.

Daily meditation practice really matters. I had been trained to break up strong emotional experiences like this into to manageable pieces. That muscle memory kicked in and it was stronger than my old numbed-out state. As I looked back at him I was aware of the strong movement in my body. Contraction and expansion occurring simultaneously—the intense emotional reaction moving through the tissues. Because I had been sitting for a long time with sensations like this in my daily practice, I was able to allow them to move through while staying very present with my dad as he attempted to absorb the doctor’s words. His expression turned to devastation and then went blank, numb. I watched him as he gave up. There was something in his eyes that vanished. A flicker of hope. I didn’t see it again after that day. He agreed to move into my Mom’s house and begin palliative care. I’m so grateful that my dad didn’t die in a hospital, plugged in to machines, but the feelings about being the one who instigated the moment he gave up have taken me time to work through.

After moving into my Mom’s house, my dad cried and told me he didn’t want to die. He said he wasn’t ready and it wasn’t fair. He asked the Hospice chaplain why good people die young. The worst thing, he said, was leaving my sisters and I. He knew how much pain we would be in, and how much we would miss him and that he couldn’t stand that. 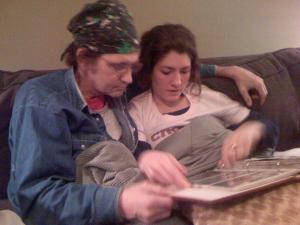 – Me and my dad looking at family photos. This is after he had been diagnosed with cancer.

I remember being that selfless and selfish simultaneously. I hated the pain that my actions caused my family, but that wasn’t enough to make me change.  I hurt myself and therefore hurt people who cared about me. Today there is leftover resentment, pain and fear that I can see in my loved ones as a result of my past actions. I take it one piece at a time, becoming a new person and showing them how I have changed. I become a new person by trying to totally accept who I am in each moment, and then allowing others to see me. In the funny jargon of meditation, this is called “equanimity.” For me that acceptance and intimacy began with sitting down at my first meditation class. Repairing the past takes time. When my brother tells me he had fun hanging out with me or my sister relaxes completely in my presence, I know that I’m on the right track.

As I write this, I’m missing my Dad. He was right, it does hurt. I can tell because I’m crying and there is a lot of pressure in my chest and some tightness in my cheeks. I’m far from that numb kid who didn’t cry for years. Showing up for my dad’s death armed with my meditation practice instead of resistance, denial, and numbing of emotional pain is a big part of what opened me up to my feeling body. My dad’s death also gave me the gift of being alive.

My dad wasn’t equipped with the psychological and spiritual tools I am. He couldn’t see past his own suffering. He couldn’t reconcile his desire to live and his suicidal behavior. Sometimes I wonder what my dad would have been like if he had found meditation. I have a pretty good idea of what I would be like if I hadn’t.