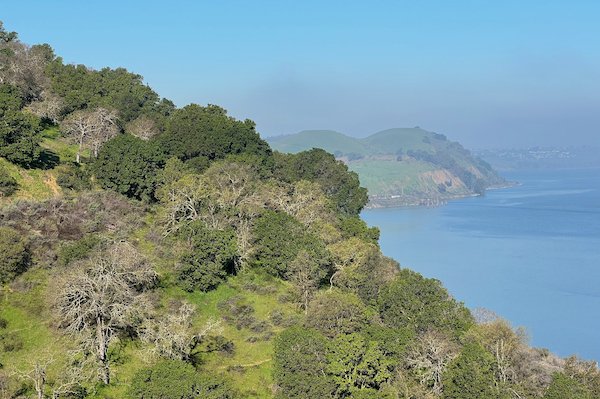 So, let’s begin. We’re not going to do most of our usual lead-in today. I just want you to set up your posture and, as usual, get your back nice and upright, pleasantly upright. Top of your head kind of feeling like it’s being pulled upwards in a really pleasant way. Chin is tucked a bit and your whole body relaxed. Okay. Face is relaxed, and so on.

Okay. So, you can feel all of that, or any of that. However, today, for the beginning part of our meditation I’m going to suggest that you feel all of that. So, feel the breath coming in your nose, going down your trachea, expanding your chest, both in front and in back, and on the sides. The whole rib cage expands. Feel that expansion and contraction. And then, still on the in-breath your diaphragm pulls down in your belly region, again, both in front and in back. The belly region expands and then on the out breath the belly region contracts. The diaphragm retracts upwards, the rib cage contracts. Feel the breath going out.

Remember we’re trying to get continuity of attention on the breath, so we’re really noticing each part of that in-breath, and each part of that out-breath, and not missing any parts. And if you notice in the cycle that there’s a certain spot where it becomes easy to lose your attention, then really focus each cycle with extra intention on that part. So we keep this nice continuity of attention going.

Okay. Good. Now we’ll switch to shamatha without an object. So we were just using the breath as an object now we’ll let go of the object and we just–shamatha in the end means peaceful stability, right? So, we can have peaceful stability even without using a focus object to kind of borrow stability like that. So now, typically we would do this with our eyes open. You don’t have to, but typically we do the eyes open and we just allow awareness to rest in itself. And if you want you can notice the breath in the background, just as kind of a very, very faint background hum, or whatever, but we’re not really paying attention to it. Simply awareness is resting very wide open and it’s not involved with anything. It’s not going after thinking it’s not going after emotions. Awareness is not going out to sights and sounds. They’re there, of course, but we’re not really paying attention to them. Rather, awareness is simply resting in itself, perfectly completely at ease, utterly open, utterly non-engaged, right? So, simply bright, clear, crisp, vivid awareness resting in itself. If anything comes up, you start getting involved in a thought, just let go of it. Start getting involved in a feeling? Let go of it, come back to simply this stable awareness that is very wide, notice that you don’t have to make awareness wide, awareness is already wide. You don’t make awareness bright and clear, it’s already bright and clear, right? It’s like that when you don’t do anything at all with it. We can narrow it and try to do stuff with it but we’re doing exactly the opposite now, doing nothing with awareness, letting it be naturally vast, naturally very wide, naturally relaxed and open, and uninvolved in anything. That’s the important part; if you find yourself grabbing onto something with awareness, just let go of that. This is tremendously relaxing and open. There’s no effort involved here or let’s say very little effort awareness on its own simply rests in itself.

Simply resting in vast spacious awareness, letting go of involvement with anything that arises.

And just as before we could notice that breathing was happening, now we’re also noticing that thinking is happening. And we can even know what the content of the thought is, but we’re not getting fused with it. We’re not really getting into the content as much as just noticing it’s there. This is interesting, we’re not changing the contents of our mind at all, we’re just letting the mind do what it does. But meditating on the mind naturally doing what it does. It’s very, very easy here to get caught up in the thoughts because we’re just letting them come into awareness. So, don’t get caught in the thoughts. It’s just awareness itself, in its own open stillness, noticing thoughts arising, not changing the thoughts or interacting with the thoughts, or being the thoughts in any way. Let’s try this now.

In a manner of speaking you are that aware space, you are not the thoughts. So just allow this aware space to know the thinking without being the thinking.

Okay. Good. Let’s let go of that now. That’s a very interesting meditation because in a way we’re not really changing our mind at all. With that last bit, the part that I call settling the mind in its natural state or taking the mind itself as path, that kind of shamatha, we’re not doing what a normal meditation does. In a normal shamatha meditation we’re either taking an object and trying to train the mind on that object in a way that the mind settles down, or with shamatha without an object we’re just looking at the settled part of the mind without engaging with any object. So we’re changing something about the mind kind of, but with this one we are just allowing your mind to be your mind, it’s just thinking it’s normal thoughts, and it’s having its normal emotions and all that but we’re changing the center of our…we’re changing our home base. We’re changing the place we’re coming from. Instead of being the thoughts and being the thinker we are instead “being the awareness” and just letting the natural whatever thoughts arise. And so in one way we’re not changing the mind at all, we’re not changing the contents. In another way we’re shifting our basis, we’re shifting our view, right? We’re shifting where we’re coming from, which is the really important part about awakening anyway, right? It’s not that we change the contents of the mind, but change whose mind, or what we even think the mind is. So with that we’re going to end our brief half hour of guided meditation today.

Donate to help create more of these videos and more.