The Mindful Wisdom of Pokémon Go

I have to admit it: Pokémon Go is one of the funnest games I’ve played in a long time. I’m old enough to have missed the Pokémon phenomenon when it first came around, but it’s easy to see why the game is taking the world by storm. (It’s been downloaded by more than 30 million people in the last two weeks.) Catching pokémon is not only ridiculously fun, it’s community-oriented, it gets people out of the house, and it’s non-zero-sum. Because of that last feature, the game tends to build bonds rather than break them. For example, the place where I live with my partner is in easy range of three (three!) pokéstops, so we can both catch the same pokémon. No scarcity models for us!

If you haven’t played the game yet, you may at least have seen crowds of people—not all of them children—gathered around a statue, fountain, or some other landmark, staring into their phones. Or ravening mobs stampeding after invisible objects in Central Park. Such scenes might lead you to believe that Pokémon Go is all about checking out of the real world and disappearing into a cloud of fantasy. But, as a meditation teacher and mindfulness coach, I’ve found that you can both enjoy the game and easily turn it into a system to generate awareness and presence. Here’s how:

Pay Attention – Mindfulness meditation teaches you to pay attention to the present moment, and so does Pokémon Go. When you are about to cross the street for example, taking a moment to check in with your surroundings, the presence of onrushing 18-wheelers, open sewer holes, or similar dangers can enhance your health and wellbeing. Keep checking the map in the app against the actual streets, buildings, parks, bodies of water, and so on around you. And it’s awesome for teaching you all the art objects—many of which you may never have seen before—in your neighborhood, because lots of them are pokéstops.

Take a Moment to Breathe – It’s really easy to get so caught up in the excitement of the game that you lose all awareness of your body in the present. Pokémon Go does, however, offer you several excellent opportunities to take a pause and breathe. Whenever you switch screens, use this as a “time-out” to simply breathe and feel your body sensations. The game will wait until you take the next onscreen action. Also, because it gets you outside and walking, there are infinite chances to sit under trees, talk with your neighbors, or just enjoy some nature—all good times to check in with your breathing. 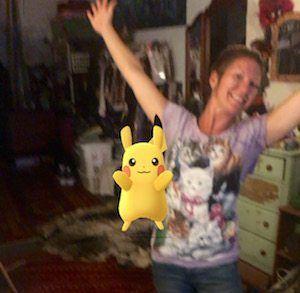 Feel Your Emotions – Pokémon Go is amzingly good at charging you with emotional ups, downs, and highwire excitment. That kind of emotional intensity is fabulous for mindfulness practice, if you take the time to check in with your feelings. For example, when you are about to attempt to catch a rare, valuable, and high-CP critter, take advantage of the pause before you toss your first pokéball. Feel the tension in your belly — is that anxiety or excitement? Notice the sensations of desire and fear that are at the emotional core of this moment. And if you lose a gym battle, pause to feel the sensations of disappointment and sorrow, before moving on. Win something big? Feel those awesome feelings as clearly as you can.

These hints should get you going, but don’t stop there. I’ve found that there are dozens of ways to use the game to not only have a blast, but also to bake mindfulness and presence into every moment. Give it a shot and thanks for reading. I have to take off now — there’s a gorgeous Flareon I want to get!