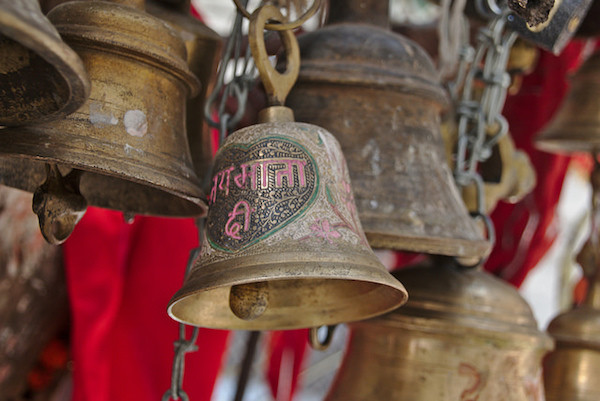 Meditation works best if you do it every day. Establishing and maintaining that kind of steady, daily practice presents a challenge, even for people with a strong motivation to sit. For example, in the past, I’ve traveled to India for meditation intensives. These trips were expensive—both in time and money—and required engineering my entire life around making such excursions possible. I was extremely dedicated, and willing to make almost any sacrifice. Long flights, uncomfortable travel, and intense dysentery—I experienced it all with almost a sense of joy, because I felt that it was part of my meditation journey, and therefore, meaningful to me.

One time, however, after overcoming seemingly insurmountable obstacles, I finally arrived at a sweet little temple in rural Gujarat. It was located in a very remote and impoverished village. I had practiced there before and felt that I had a pretty good understanding of what to expect. It would be dirty and uncomfortable, the food would either be unpalatable or almost non-existent, it would be impossible to sleep. There would be scorpions, bees, ants, hundred-degree heat, interruptions, no hot water, and sometimes no water at all. All of this I was ready for, figuring it was all worth it. I had come to love this village and its people, and expected that I would have a month of intensive meditation in blissful silence.

Getting my money’s worth

But this time, there was a new challenge awaiting me. The temple had recently purchased a new sound system. This in a village where most homes were constructed of rough wood and mud with floors of smoothed cow dung, and almost no house had electricity or running water. Because they had gotten hooked up to the electricity grid, the temple rigged a microphone and ran in through a soundboard to some speakers. These speakers were like something you might find on a battleship at sea: large cones that only captured the most penetrating treble notes. It was the most blaring, ugly, ear-shattering sound system imaginable.

After all the money, the travel, the difficulties, I had just settled into my meditation spot, and was getting ready for a solid month of practice. With growing unease, I heard the sound system getting put into place, but was relieved that it was only an hour or two a day of them experimenting with it. I meditated as best I could during the other hours, and weathered the storm the rest of the time. I figured it would be tough, but I could still get my “money’s worth” out of the retreat.

Give up all resistance

But the next day, it all fell apart. The head priest of the temple somehow acquired an electronic keyboard; a Casiotone. The smallest, cheapest, and most hideous-sounding keyboard. This he played next to the microphone, broadcasting its squeaks and squawks through the monstrous sound system and out into the dusty Indian day. He didn’t know any songs, he simply noodled around on the instrument, without tempo, tonality, or intention. And he proceeded to do it, more or less, continuously for days. He must have been letting other people take over at various times. It seemed as though the whole village was agog over the sound system and the miraculous Casiotone, because they never stopped. On one level it was kind of hilarious and awesome.

Sequestered away in my meditation cell, however, each bleat from the keyboard was like a stab of pain in my guts. I just kept thinking of the wasted hours of my retreat, all of the wasted money and effort getting to India, the trek all the way out to this remote region to practice. All for nothing. I was devastated. It seemed that there was no way out of spending my entire retreat listening to an atonal cacophonous concert at ear-splitting volume.

Giving diplomacy a try, I spoke to the head priest, who was surrounded by friends and admirers, all of whom were focused on the music. Would it be possible, I asked, to play a little less music? They smiled and pointed at the keyboard and the sound system. Wasn’t it wonderful? Wasn’t it just the greatest thing? The head priest, who I liked a lot, just smiled and played more for me. I got the point that it wasn’t going to stop anytime soon, and slunk back to my room.

Having nothing else to do, and having made a commitment to practice, however, I just kept sitting there. I did my best to meditate, hour after hour, day after day. Slowly, something began to happen. I began to get tired of hating and resisting the music. It was just too hard to stay upset about it. And I noticed that the less I resisted it, the less it bothered me. It was still a terrible racket, like a hundred calliopes falling down a staircase, amplified through something you might find at a stadium rock concert. But slowly, it didn’t bother me as much, and eventually, it didn’t bother me at all. I was able to get as much, if not more, from that retreat than with any other.

The moral of this story is the importance of cultivating acceptance in meditation practice and in life. But there is another lesson, which is that it would have been very easy for me to have given up and gone home. Often, the reasons that make it challenging to maintain a consistent meditation practice are quite mundane: your cat won’t leave you alone, your neighbor plays loud music, the phone keeps ringing. In day-to-day meditating, these little things can grow big enough to frustrate even the most dedicated person.

It’s important to minimize all such annoyances by intelligently engineering your practice times and places. Sit at the quietest times of day, unplug the phone and the computer, let your partner know that you don’t want to be disturbed, put the cat outside. Don’t make it necessary for you to go to extremes to get your practice done; instead do everything possible to make it easy to keep going. By reducing the number of reasons to stop sitting, you’ll be increasing your likelihood of success with meditation.