Concentration: Light as a Feather 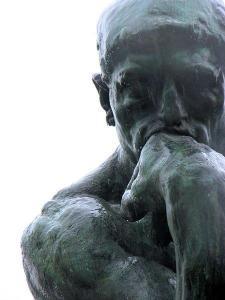 I was in Paris recently, and visited the Rodin museum. I’ve always loved his work, and some of the best pieces are at this gorgeous 18th century hotel-cum-museum. In the garden outside sat the French sculptor’s most well known piece, the Thinker, atop a tall granite plinth. As I gazed at this masterpiece, I noticed that the Thinker is having a hard time concentrating on his thinking. His head is resting on his enormous fist, as if it’s too heavy to hold itself up, and he looks kind of constipated. His brows are furrowed and his face is twisted into a mask of intense effort. It occurred to me that the sculpture is a perfect depiction of our cultural image of concentration.

Picture yourself concentrating. Make a face of concentrating right now. If you’re like most people, you will make a face of scowling effort. Brows knitted, mouth pursed, almost as if you’re trying to lift an enormous weight. The message here is plain to read in our body language: we think that concentration is hard. That it takes tremendous effort. And that the more strenuous effort we put into it, the better our concentration will be.

Human beings evolved from animals, and the attention processes of our brain are based in those of our animal forebears. Attention is necessary because brains have limited processing capacity—it’s not possible to notice everything at once in detail. Nature provides attention as a way of directing the brains resources to what is important right now. Usually this is some kind of threat or benefit: we usually pay attention to things like food, sexual opportunities, children, or something dangerous in our environment.

Light as a Feather

So the secret to good concentration is to stay as relaxed, open, and matter of fact as possible. Every time you feel yourself tightening up at all—your brows tensing, your eyes focusing, your breathing shortening, a feeling of bearing down—take a mental step back, open up, and just release all of that intensity. Relax, and let go of the sense of concentration as tension, and instead return to the sense of concentration as iteration. Concentration as a circle that loops back, over and over, to the object of focus. Concentration is soft, gentle, open, and light as a feather. It is also, in the way of all cyclical processes, relentless. Although it is loose and open, it returns constantly to the object of focus, over and over and over. 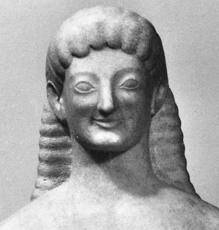 Rodin’s heavy, bronze, muscular, scowling Thinker does not depict this sort of concentration. Instead it is captured much better in the style of Greek sculpture known as the “archaic smile.” This is a small, closed mouth smile that is just suggested at the corners of the lips. It was used during the Archaic period of ancient Greece to suggest that the subject was infused with a sense of wellbeing, “timelessly intelligent and timelessly amused,” according to author John Fowles. You can often see this sort of smile on a statue of a meditating Buddha.

This is the feeling of concentrating. Easy, pleasant, and open. Light as a feather.

Learn all about how to concentrate