Zen Priest on the Future of Spirituality 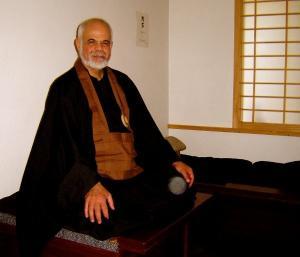 Love it or hate it, the world’s religions are in no danger of disappearing any time soon. But that doesn’t mean religious and spiritual sensibilities aren’t going to evolve. To learn more about religion’s future, we talked to Michael LaTorra. By day, he’s a mild-mannered Assistant Professor of English at New Mexico State University, and by night he’s a black-garbed Zen priest at the Zen Center of Las Cruces.

He is also the author of A Warrior Blends with Life: A Modern Tao, a book about spirituality in modern life.

How do you distinguish between being religious and being spiritual? Is it irrational today to still believe in God or other supernatural forces?

According to recent surveys, approximately 20% of Americans declare themselves to be spiritual but not religious. There is more than one way to interpret the meaning of this, of course, and my perspective is only one among many. I interpret this on different levels. First, I would define being religious as being associated with an established religious institution. Being spiritual, on the other hand, is a more nebulous term. It might mean feeling drawn to, or associated with, something numinous without any necessity to be a member of a group. On a second and deeper level, I distinguish between types of religion (and this would also entail spirituality) as being either exoteric or esoteric. The exoteric is the outer or conventional level. Exoteric religion is all about beliefs, doctrines, ceremonies, and institutions. The deeper, often hidden esoteric level is all about practices that transform the practitioner. The esoteric also includes the community of those who engage these practices, and the guiding teacher who instructs and initiates these practitioners. All of the major ancient religions began as small esoteric groups, or what some people today might disparagingly refer to as “cults.” The running joke has been that the difference between a cult and a religion is about 100 years.

Many religious believers will argue for the importance of believing in God. They will also assert that God has instructed humanity to behave in certain ways, and not in others. In addition, they may claim that it is their duty to persuade or even coerce others into following those instructions.

Esoteric spiritual practitioners would say that what you believe is much less important than what you do. Especially what you do with your attention. Meditation and certain other practices engage both the body and the mind. When people practice these disciplines of attention correctly (which anyone can learn to do with some instruction) they will have all sorts of effects, including greater mental clarity, less emotional reactivity, more relaxation, and so forth. And that’s just the beginning. If you go deeper, you may experience extraordinary states of consciousness, and plumb greater depths of your psyche. That can be scary territory. But if you do this under the guidance of a teacher who knows that territory, the practice results in positive transformations.

So, to answer the last part of your question: belief is always irrational. Believing in God is not rational. However, spiritual practices that open a person into a feeling of Divine Presence are neither rational nor irrational, just as it is neither rational nor irrational to fall in love. It’s not a matter of belief then, but of personal experience and tacit understanding. As the Sufis say “He who tastes, knows.”