Zen for High Schoolers: ‘Notice the Anxiety. Notice the Fear.’ 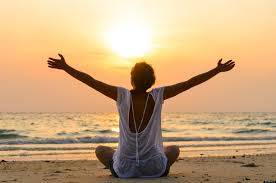 By Aidan Gardiner for The New York Times

La-keeyatta Steward, 17, sat on a small black pillow one recent Tuesday afternoon, her legs tucked under her. Her meditation instructor told her to imagine her body pulled upward by a string, so she lowered her shoulders and straightened her back.

Then two of her classmates burst in.

Riding the subway after school, he said, he saw about 20 teenagers beat up another boy.

The news startled Ms. Steward and the other high school students at the Brooklyn Zen Center, where they attend weekly meditation sessions meant to help them handle the challenges of growing up in the city.

“This is where you actually use this,” the instructor, Greg Snyder, told Mr. Alsopp. “Notice the thought. That’s fine. Notice the anxiety. Notice the fear. Use the meditation to focus your mind. Are you with me?”

“I’m with you,” Mr. Alsopp said before settling onto his pillow, still fidgeting.

Mr. Snyder is a Zen Buddhist priest who leads the center, a converted loft with pristine white walls and exposed beams set in a small industrial building near the Gowanus Canal. The center’s Awake Youth Project includes weekly workshops in five public high schools and teenager-led sessions at the center.

Now, Mr. Snyder is taking on the tougher task of teaching meditation to Level 1 offenders— students who are frequently put in detention or suspended because they start fights or cause trouble — at Bushwick High School. Administrators at the school approved the program April 5 and plan to start it in coming weeks.

Students in trouble are given the choice of traditional punishments or participating in the meditation program, where Mr. Snyder will teach them how to meditate, understand volatile emotions and curb impulsive behavior. He intends to take the program to other schools as well.