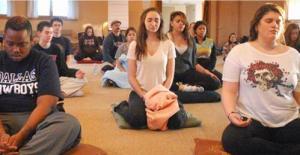 By Ann Douglas for The Star

Here’s some good news about that much talked about teenage brain. Teenagers who practice mindfulness — a technique that involves focusing on what is happening in the moment and being aware of and accepting of emotions — benefit from increased self-control, healthier relationships, and improved overall well-being.

Psychologists at Australia’s University of Wollongong and George Mason University in Washington, DC, studied mindfulness in 776 Grade 10 students over a one-year period. The results of their research were published in the August 2011 issue of the Journal of Adolescence.

Mindfulness is a useful strategy for teenagers because it allows them to think through their emotions as opposed to reacting impulsively — something their brains are primed to do during the teen years.

“The teen brain is still undergoing a period of active construction,” explains Dr. Jean Clinton, an associate clinical professor in the Department of Psychiatry and Behavioural Neuroscience at McMaster University, division of Child Psychiatry. “And, during this time, teenagers are more reactive. Mindfulness allows them to pay attention to their feelings rather than being their feelings.”

Mindfulness also involves accepting what you are feeling and understanding that an emotion is just an emotion: it doesn’t control you, explains Shelley Hermer, a social worker based in Peterborough, Ontario. “Feelings come and feelings go. And there’s no such thing as a bad feeling. Being angry is just as valid as being excited.”