Taking a Break from Technology 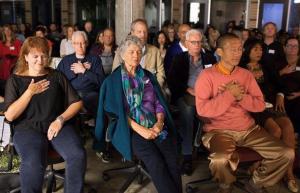 What is the sound of one hand texting?

As Soren Gordhamer patiently quieted a packed Wisdom 2.0 event in San Francisco in September for a guided meditation, a few in the communal meeting space known as the Hub couldn’t resist thumbing another message or two before pocketing their sacred devices. A willowy young brunette in a black T-shirt shot video of the crowd with her iPad from her front-row seat. Even after Mr. Gordhamer, who is tall with a sculptural face and Errol Flynn hair, urged the group to “come into presence,” his voice rising in emphasis, someone’s phone was buzzing like a dragonfly.

Mr. Gordhamer started Wisdom 2.0 in 2009 to examine how we can live with technology without it swallowing us whole. The wait lists for his panel talks and conferences now run into the hundreds.

The “Disconnect to Connect” meet-up was typical. The audience was mostly young, mostly from the Silicon Valley tech scene and entirely fed up with taking orders from Siri. “There was a time when phones didn’t tell you to do everything,” said Mr. Gordhamer, 45, as the conversation got rolling. “What’s work, what’s not work, it’s all become blurred.”

And yet, the problem may offer a solution. Loïc Le Meur, a French blogger and entrepreneur and the evening’s guest speaker, recommended a meditation app called Get Some Headspace. The program bills itself as the world’s first gym membership for the mind. “It’s a way to have a meditation practice without feeling weird about it,” said Mr. Le Meur. He was wearing Google Glass with only a hint of irony. “You don’t have to sit in a lotus position. You just press ‘play’ and chill out.”