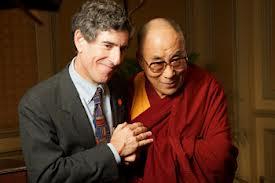 In a recent interview with the APA Monitor, Richie Davidson spoke about the effects of mindfulness meditation on resilience:

“…[Speaking of] resilience again, there is a method of meditation that is very popular called mindfulness meditation. And what mindfulness meditation does is teach people to pay attention on purpose, nonjudgmentally. The nonjudgmental piece is very important, because what happens with emotional interactions — particularly negative ones — is rather than paying attention to them nonjudgmentally, we judge, and the judgments lead to rumination and perseveration of the emotion way beyond the point where the elicitor is present.

So, for example, if we have an argument with someone close to us in the morning, some of us keep replaying it all day. And it has a deleterious effect on our mood and behavior for many hours after the original argument.

If we can learn to pay attention nonjudgmentally, it offers the possibility of having a quicker recovery. Recent research is bearing that out. We’ve done studies, and there are other studies in the literature, showing that simple forms of mindfulness meditation actually do facilitate recovery from adversity and thus promote a greater resilience style, and change the brain circuits that are associated with resilience in ways that we would predict.”