The seven-day retreat had just ended and I was sitting with my boyfriend and a small group of fellow meditators. We were eating lunch and speaking our first words since coming out of silence. In an attempt to start a little friendly conversation, one woman asked if we would all go around the table and share a little about ourselves, specifically how we had been drawn to Buddhism. People shared stories of how they had been introduced to the Buddha’s teachings; as a teen in high school, by their wife, born Buddhist. When my turn arrived I took a long pause, looked around the table and said,  “Well, I guess you could say that I am a practicing non-Buddhist.” 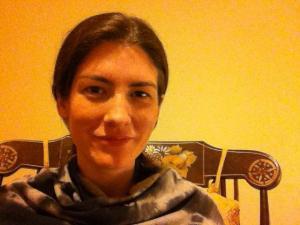 After a week without words, facial expressions become very sharp and easily read. Mostly people looked confused, but I’m pretty sure I saw at least one person attempt to hide a look of disapproval. I went on to explain that I have a daily practice, don’t eat meat, don’t drink, don’t do drugs, and pretty much follow the Buddhist precepts. However, do not identify as Buddhist. I told them that I teach mindfulness meditation and that I focus on technique rather than any religious ritual or history. I shared with the group that I’m interested in the science and psychology of meditation and finding ways to offer it to anyone, regardless of their religious beliefs or philosophies. I also mentioned that I first got into meditation because, my friend and teacher, Michael Taft had called me “chicken,” and like Marty Mcfly I couldn’t let that stand.

Rites and Rituals, Chanting and Devotion

Now, it’s totally expected and acceptable that my turn in this round robin was received with a little surprise. We had just completed a Buddhist Monastic retreat. It was run by Buddhist monastics for Buddhist practitioners. I have been to two others before this one. I really like these retreats because they support a hardcore practice. No eating after twelve noon, no talking, minimal sleep in a sparse setting, long sits (with the option to stay up all night meditating), and no entertainment. When you remove the distraction that extra food, excessive sleep, speaking, and entertainment provide you are left with a whole lot of You. This makes for a great opportunity to dive into the many layers that make up your moment-to-moment experience, the process of You. There is also a very committed community of meditators that attend Monastic retreats. When there are seventy-five other people who are really dedicated surrounding me, it really helps my practice. There are many types of retreats, including my teacher, Shinzen Young’s retreats, that provide the support required for a serious practice. I’ve just gotten in the habit of attending Monastic retreats. 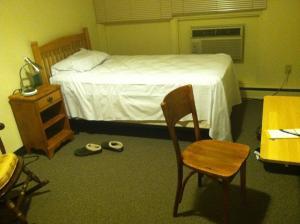 My bedroom at the retreat

Monastic retreats attempt to create the atmosphere of a monastery. These retreats have a lot of ritual. This includes bowing three times when you enter the meditation hall and before you exit. Once to the Buddha, once to the Dhamma (the Buddha’s teachings), and once to the Sangha (the community of meditators). There is also a lot of chanting of verses like this: To the Blessed and Noble One, who fully attained perfect enlightenment, I pay homage. During my first two monastic retreats I joined in the ritual, even though I’m not Buddhist and had no spiritual or emotional connection to the bowing and chant.

At this retreat, however, I felt differently about that. I tried to bow. I tried to chant. It seemed wrong somehow, like going to Mass and receiving the Eucharist, or like Helena Bonham Carter’s character in Fight Club identifying at self-help meetings in which she didn’t belong. It had been a year since my last retreat and I had changed. I could no longer do something that wasn’t true to me. So I traded in the security of being a part of the group for authenticity.I think that the year of meditation that preceded this retreat had striped away the parts of me that could identify just to identify. I am less and less drawn to label myself as anything in particular. There was a brief period when I actually felt some pressure to call myself Buddhist. I think in part that is why I joined in the ritual in the past. It was easier for me to just participate in that solidarity. Without a name for who I am and what I believe I am thrust deeper into the mystery and the vastness of being alive. While this separates me from groups on the surface, being true to this process of discovery brings me closer to humankind on a much deeper level.

The retreat had been lead by two lovely people, Ayya Anandabodhi and Ayya Santacitta. They are pretty radical female Monastics. They broke off from the Ajahn Chah lineage last year because full ordination was not available for them as women. This was a big deal in the Buddhist community and is an important step toward equality for women in Buddhism. Ayya Anandabodhi and Ayya Santacitta are very funny, compassionate, and thoughtful women. They have both been named Outstanding Women in Buddhism and are supported by the Saranaloka Foundation. At the beginning of the retreat they told us that if we didn’t want to bow and chant it was completely okay, but to work with the feelings and thoughts that came up around that. That’s what I did. When I felt the heat of embarrassment rise from being one of the few people out of a hundred not bowing, I explored that sensation and the thoughts that came up.

There was a chance to work with this even more about half way through the retreat when the Ayyas did a Q & A session. People could write questions and comments down on small pieces of paper and drop them in a bowl to be answered at the evening talk. Someone commented on the fact that there were a few people who were not bowing and chanting, and that it was disruptive to the community. I’m not sure what this person expected from these maverick nuns, but I’m pretty sure they didn’t get it. Both Ayyas expressed very strongly that adherence to ritual did not a mindful practitioner make. They referred to the Ten Hindrances to Enlightenment, one of which is “attachment to rites, rituals, and ceremonies.” Basically they shut down the idea that there was anything wrong with the lack of bowing and chanting. Even so, there was a feeling of sticking out in a bad way that came up after that discussion. I had the opportunity to observe my mind try to work it’s way around the feelings that arose.

Biologically, sticking out from the group in a “bad” way is not good at all. In days gone by, the threat of being cast out of the tribe to fend for oneself was something to be avoided at all costs. Our bodies and minds still react as if it’s life or death when faced with rejection or judgment from a group. The fantastic thing about meditation is that you gain the tools to mindfully observe this reaction and then act accordingly. In some situations the right thing to do may be to “join” the group, but you will never know what is truly right for you if you don’t have a clear perspective on what’s really happening inside of you.

Should I attend Monastic retreats in the future? There is so much that I love about them and they are also very affordable. But, I’m not a Buddhist, plain and simple. I practice meditation because it makes my life better, not because the Buddha meditated several thousand years ago and not because I hope to attain some classic form of enlightenment. I teach meditation because I believe that it can work for anyone and because students keep showing up. I also teach because I’ve learned to listen to the part of me that isn’t afraid to stand out in a group or to be rejected. That is the part that leads me though my life these days, not every moment, but most. I know that I won’t be the right teacher for everyone, especially not those who seek lessons in Buddhism, but through my practice I will become someone who can connect with and have compassion for everyone. We are all made of the same stuff and words like Pro-Choice, Christian, Republican, Lesbian, or Buddhist can’t change that.

In the sky, there is no distinction of east and west; people create distinctions out of their own minds and then believe them to be true. ~ Buddha


Jessica Graham is a meditation teacher, sex, relationship, and spiritual guide for couples and individuals, speaker, and author of Good Sex: Getting Off Without Checking Out. She is a contributing editor for Deconstructing Yourself and her work is featured on many apps including; Simple Habit, Wise@Work, Emjoy, Breethe, and Sanity & Self. Jessica is also an award-winning actor and filmmaker. Connect with Jessica on Instagram and at yourwildawakening.com.