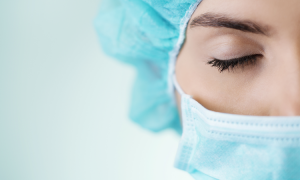 By Lecia Bushak for Medical Daily

The things we stress about are always going to be there, especially at work. But the way we react to these daily stresses can make an enormous difference in our overall health and happiness.

A new study testifies to this notion. Led by researchers at the Ohio State University Wexner Medical Center, the research found that relaxation interventions at a highly stressful workplace decreased stress levels among employees. The study focused on members of a surgical intensive care unit who were routinely exposed to some pretty high-pressure — and often upsetting — situations. For eight weeks, the participants underwent interventions at work that had them practice mindfulness, gentle stretching, yoga, meditation, and listening to music.

Researchers measured psychological and biological markers of stress, such as the amount of cortisol in the saliva, one week before and one week after the intervention. They found that the levels of salivary [alpha]-amylase, which are indicative of the activation of the fight or flight response, decreased significantly after the intervention compared to the control group who had no intervention.

“Our study shows that this type of mindfulness-based intervention in the workplace could decrease stress levels and the risk of burnout,” Maryanna Klatt, associate clinical professor at Ohio State’s Wexner Medical Center and an author of the study, said in the press release. “What’s stressful about the work environment is never going to change. But what we were interested in changing was the nursing personnel’s reaction to those stresses. We measured salivary alpha amylase, which is a biomarker of the sympathetic nervous system activation, and that was reduced by 40 percent in the intervention group.”