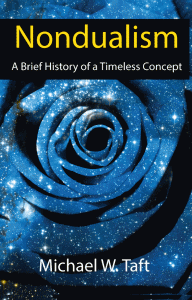 Deconstructing Yourself is pleased to announce the release of a new book by Michael W. Taft, entitled Nondualism: A Brief History of a Timeless Concept.

Nondualism is the philosophical and religious concept that all things are essentially one. It is called a philosophy of “identity” because it sees the entire universe, including any deity, as one unified whole. Although there appear to be a multiplicity of things in existence, any actual difference between them is illusory. Reality is not a multiplicity, in this view, but a singularity. Often in nondualism the apparent profusion of objects and beings in the universe is thought to be nothing other than a fantasy, and the only real thing is consciousness itself. Some, but not all, forms of nondualism include the idea of God, in which case God, creation, and the individual are seen to be identical. Nondualism has played a major role in the religions of Asia, such as Hinduism and Buddhism. It has also made some minor appearances in Western philosophies, but is an unpopular concept in the mainstream Abrahamic religions (i.e.—Judaism, Christianity, Islam).

Nondualism is the opposite (ha-ha) of a philosophy of “difference,” which sees reality as composed of many separate, individual parts, and usually a God who is also fundamentally separate from creation. Philosophies of difference, or dualism, are well known in the West: Christianity, Judaism, and to a large extent Islam are dualistic religions. The Abrahamic religions have had, here and there, a few philosophers and mystics that spoke of a nondual reality, but these have been few and far between.

India is unique in that it gave birth to several whole religions of pure identity (i.e. pure nondualism) – for example, Buddhist Madhyamika and Hindu Advaita Vedanta.

The essence of nondual philosophy could be roughly summed up as: there is no you, no world, no deity, and no reality apart from the One Thing, which is consciousness. Everything else is imaginary.  In this book we’ll examine the long history of this interesting and powerful idea.

In writing this text, it is my hope that the many people in the West who are currently involved in a nondual tradition will gain a bit more understanding of the background of nondualism, and perhaps where their tradition fits into the greater picture.

What is nondualism? Learn more here

Here’s Michael Taft giving a talk on the subject at the Science and Nonduality conference.