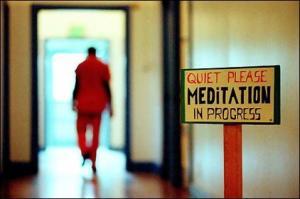 By Christopher James for Furturity

A meditation-based therapy known as ‘mindfulness’ training can improve attention skills in incarcerated youth and increase self-control over emotions and actions, research shows.

The recent study is the first to show that mindfulness training can be used in combination with cognitive behavioral therapy to protect attentional functioning in high-risk incarcerated youth.

Researchers followed 267 incarcerated males, ages 16 to 18, over a four-month period. They found that participation in an intervention that combined cognitive behavioral therapy with mindfulness training (or “CBT/MT”), called Power Source, had a protective effect on youths’ attentional capacity. This research, published in the journal Frontiers in Psychology, is the largest controlled study of mindfulness training for youth to date.

“The CBT/MT approach responds to the significant childhood psychosocial hardships that most incarcerated youths have experienced, including exposure to violence, poverty, and physical, and emotional abuse by caregivers,” explains principal investigator Noelle R. Leonard, a Senior Research Scientist at the New York University College of Nursing.

“These experiences impair cognitive control processes, such as attention regulation, which is vital for the self-regulation of feelings and actions. The antisocial behavior prevalent among youthful offenders is the result of an ongoing interplay between this psychosocial adversity and deficits in cognitive control processes, particularly attention.”

Improving attention can lead to better self-control. Reflecting on the impact of the intervention, one study participant stated, “Just yesterday. Got into an altercation with a guy in the kitchen. Guy says, ‘We’re gonna fight.’ At first thought, my initial response was to fight. Then I thought about the consequences—I’d lose my job [in the prison kitchen], don’t want to go to court and don’t want to hear the judge mouth about my fights.” Attention to the goal of staying out of trouble allowed this participant to consider an alternative to fighting.

“Mindfulness meditation can be seen as involving two components: self-regulation of attention and non-judgmental awareness,” says Leonard. “The practice involves training youth to attend to something as simple as the sensations associated with breathing. While our minds will invariably wander to other thoughts or get distracted by things in the environment, by repeatedly returning attention back to the breath in a non-judgmental way, we are building attentional capacity to interrupt the cycle of automatic and reactive thoughts.”

The mindfulness training is complemented by exercises that focus on taking responsibility for offending behavior and increasing motivation for engaging in non-violent, pro-social behaviors. “Although we don’t have direct evidence for this yet, we hypothesize that this repeated practice can translate into maintaining a focus on pro-social or non-violent goals in the course of youths’ daily lives, amidst the harsh conditions of incarceration or in the context of anti-social peers” adds Leonard.

“Mindfulness training helps youth consider more adaptive alternatives,” added Bethany Casarjian of the Lionheart Foundation, who developed the Power Source intervention and co-authored the study. “It creates a gap between triggers for offending behavior and their responses. They learn to not immediately act out on impulse, but to pause and consider the consequences of a potential offending and high risk behavior.”