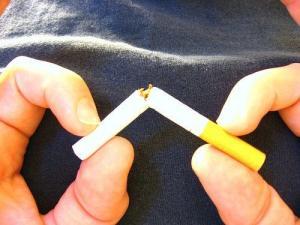 Addiction to smoking and other substances involves a particular set of brain areas related to self-control, according to numerous research. For a new study, researchers wondered if a training approach designed to influence this addiction pathway could influence smokers to reduce their tobacco use — even if smokers did not intend to do so.

It worked. The study, published online in the Early Edition of the Proceedings of the National Academy of Sciences, found that smokers trained with a form of mindfulness meditation known as Integrative Body-Mind Training (IBMT) curtailed their smoking by 60 percent. Subjects in a control group that received a relaxation regimen showed no reduction.

Studies of smoking usually recruit those desiring to quit or reduce their smoking. Researchers approached this study differently. They sought volunteers interested in reducing stress and improving their performance. In actuality, the experiment was designed to explore how IBMT — previously shown to improve the self-control pathway related to addiction — would impact smoking behavior. Among the volunteers were 27 smokers, mean age 21, who smoked on average 10 cigarettes a day; 15 of them (11 men) were placed in the experimental group receiving IBMT training for a total of five hours over two weeks.

IBMT, which involves whole body relaxation, mental imagery and mindfulness training led by a qualified coach, has long been practiced in China. It has been under study for its potential impacts on a variety of stresses and related changes in the brain including function and structure. Co-authors of the paper, Yi-Yuan Tang of Texas Tech University in Lubbock and Michael I. Posner, professor emeritus of psychology at the University of Oregon, have collaborated on a series of studies on IBMT. Tang, formerly a research professor at the UO, is now with the psychology department and director of the Neuroimaging Institute at Texas Tech.

“We found that participants who received IBMT training also experienced a significant decrease in their craving for cigarettes,” Tang said. “Because mindfulness meditation promotes personal control and has been shown to positively affect attention and an openness to internal and external experiences, we believe that meditation may be helpful for coping with symptoms of addiction.”