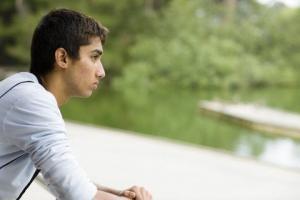 Mindfulness-based meditation could lessen some symptoms associated with cancer in teens, according to the results of a clinical trial intervention led by researchers at the University of Montreal and its affiliated CHU Sainte-Justine children’s hospital. Mindfulness-based meditation focuses on the present moment and the connection between the mind and body. Adolescents living with cancer face not only the physical symptoms of their condition, but also the anxiety and uncertainty related to the progression of the disease, the anticipation of physical and emotional pain related to illness and treatment, the significant changes implied in living with cancer, as well as the fear of recurrence after remission. Catherine Malboeuf-Hurtubise of the university’s Department of Psychology presented the findings today at the American Psychosomatic Society Meeting in San Francisco.

The researchers asked 13 adolescents with cancer to complete questionnaires covering mood (positive and negative emotions, anxiety and depression), sleep and quality of life. The group was divided in two: a first group of eight adolescents were offered eight mindfulness-based meditation sessions and the remaining five adolescents in the control group were put on a wait-list. The eight sessions were 90 minutes long and took place weekly. After the last meditation session, patients from both groups filled out the same questionnaires a second time. “We analyzed differences in mood, sleep and quality of life scores for each participant and then between each group to evaluate if mindfulness sessions had a greater impact than the simple passage of time. We found that teenagers that participated in the mindfulness group had lower scores in depression after our 8 sessions. Girls from the mindfulness group reported sleeping better. We also noticed that they developed mindfulness skills to a greater extent than boys during the sessions,” Malboeuf-Hurtubise said. “Our results suggest that mindfulness sessions could be helpful in improving mood and sleep in teenagers with cancer, as previous oncology research suggests with adults.”

Differences between both groups were not large enough for the researchers to impute observed benefits solely to the mindfulness component of the sessions. “The social support provided to the adolescents in the mindfulness group could possibly explain observed benefits on mood and sleep,” Malboeuf-Hurtubise said. “Nonetheless, mindfulness-based interventions for teenagers with cancer appear as a promising option to lighten psychological inconveniences of living with cancer.” The researchers intend to offer members of the control group an opportunity to undertake the meditation sessions.