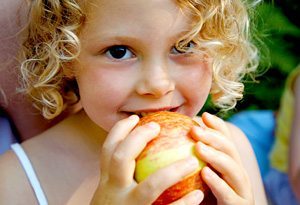 By Mary MacVean for the Los Angeles Times

Erica Eihl speaks in a voice that her kindergartners can hear only if they are as quiet as the church mice in children’s storybooks.

And with a couple of squirrelly exceptions, they stay that quiet for 15 or 20 minutes — a near eternity — as Eihl guides them to use all their senses to consider a piece of apple, with directions such as, “Looking at the apple, look on the outside. Look on the inside.… Remember, keep it in your palm and just look at it.”

When she asks for their input, she gets raised hands and comments such as: “It smells juicy and apple-y” and “I see little tiny white spots.”

Mindful eating is just one of the mindful practices at the Citizens of the World charter school in Mar Vista, with 160 children in kindergarten through second grade.

“We are mindful and heartful” is the golden rule at the school, and the children practice mindful meditation in the mornings and after recess, among other times, often with 30 seconds to five minutes of silence — time when they can notice what is happening at the moment without judgment, which is at the heart of mindful meditation.

“They’re very receptive to it,” Eihl says. “They’re so emotional at this age. It’s allowing them to have the tools to be expressive” about their emotions and cope with them.

Educators are catching on to the benefits of mindful meditation.

Indeed, schools in 48 states, and hundreds of schools in California alone, have programs, says Chris McKenna, the program director at Mindful Schools in Emeryville, Calif., which has trained more than 2,000 teachers in mindfulness.

“One of the reasons it’s growing is because the kids are under so much pressure now, with the testing culture and the pressure put on them by teachers and parents to be successful,” says Vicki Zakrzewski, the education director at the Greater Good Science Center at UC Berkeley, which studies the science behind mindfulness.

Mindfulness helps with focus, attention and calming the emotions, she says. Teachers and administrators, she adds, see it as a tool that also can boost school performance.

“Schools are absolutely paying attention to the benefits of mindfulness,” says Lorraine Hobbs, the director of youth and family programs at UC San Diego’s School of Medicine and Center for Mindfulness. “When we can teach kids to pay attention to this inner landscape,” they can learn kindness and compassion.