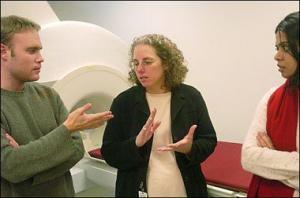 People who meditate grow bigger brains than those who don’t.

Researchers at Harvard, Yale, and the Massachusetts Institute of Technology have found the first evidence that meditation can alter the physical structure of our brains. Brain scans they conducted reveal that experienced meditators boasted increased thickness in parts of the brain that deal with attention and processing sensory input.

In one area of gray matter, the thickening turns out to be more pronounced in older than in younger people. That’s intriguing because those sections of the human cortex, or thinking cap, normally get thinner as we age.

“Our data suggest that meditation practice can promote cortical plasticity in adults in areas important for cognitive and emotional processing and well-being,” says Sara Lazar, leader of the study and a psychologist at Harvard Medical School. “These findings are consistent with other studies that demonstrated increased thickness of music areas in the brains of musicians, and visual and motor areas in the brains of jugglers. In other words, the structure of an adult brain can change in response to repeated practice.”

The researchers compared brain scans of 20 experienced meditators with those of 15 nonmeditators. Four of the former taught meditation or yoga, but they were not monks living in seclusion. The rest worked in careers such as law, health care, and journalism. All the participants were white. During scanning, the meditators meditated; the others just relaxed and thought about whatever they wanted.

Meditators did Buddhist “insight meditation,” which focuses on whatever is there, like noise or body sensations. It doesn’t involve “om,” other mantras, or chanting.

“The goal is to pay attention to sensory experience, rather than to your thoughts about the sensory experience,” Lazar explains. “For example, if you suddenly hear a noise, you just listen to it rather than thinking about it. If your leg falls asleep, you just notice the physical sensations. If nothing is there, you pay attention to your breathing.” Successful meditators get used to not thinking or elaborating things in their mind.

Lazar took up meditation about 10 years ago and now practices insight meditation about three times a week. At first she was not sure it would work. But “I have definitely experienced beneficial changes,” she says. “It reduces stress [and] increases my clarity of thought and my tolerance for staying focused in difficult situations.”

Insight meditation can be practiced anytime, anywhere. “People who do it quickly realize that much of what goes on in their heads involves random thoughts that often have little substance,” Lazar comments. “The goal is not so much to ‘empty’ your head, but to not get caught up in random thoughts that pop into consciousness.”

She uses this example: Facing an important deadline, people tend to worry about what will happen if they miss it, or if the end product will be good enough to suit the boss. You can drive yourself crazy with unproductive “what if” worry. “If, instead, you focus on the present moment, on what needs to be done and what is happening right now, then much of the feeling of stress goes away,” Lazar says. “Feelings become less obstructive and more motivational.”

The increased thickness of gray matter is not very much, 4 to 8 thousandths of an inch. “These increases are proportional to the time a person has been meditating during their lives,” Lazar notes. “This suggests that the thickness differences are acquired through extensive practice and not simply due to differences between meditators and nonmeditators.”

As small as they are, you can bet those differences are going to lead to lots more studies to find out just what is going on and how meditation might better be used to improve health and well-being, and even slow aging.

More basic questions need to be answered. What causes the increased thickness? Does meditation produce more connections between brain cells, or more blood vessels? How does increased brain thickness influence daily behavior? Does it promote increased communication between intellectual and emotional areas of the brain?

To get answers, larger studies are planned at Massachusetts General Hospital, the Harvard-affiliated facility where Lazar is a research scientist and where these first studies were done. That work included only 20 meditators and their brains were scanned only once.

“The results were very encouraging,” Lazar remarks. “But further research needs to be done using a larger number of people and testing them multiple times. We also need to examine their brains both before and after learning to meditate. Our group is currently planning to do this. Eventually, such research should reveal more about the function of the thickening; that is, how it affects emotions and knowing in terms of both awareness and judgment.”

Since this type of meditation counteracts the natural thinning of the thinking surface of the brain, could it play a role in slowing – even reversing – aging? That could really be mind-boggling in the most positive sense.

Lazar is cautious in her answer. “Our data suggest that one small bit of brain appears to have a slower rate of cortical thinning, so meditation may help slow some aspects of cognitive aging,” she agrees. “But it’s important to remember that monks and yogis suffer from the same ailments as the rest of us. They get old and die, too. However, they do claim to enjoy an increased capacity for attention and memory.”