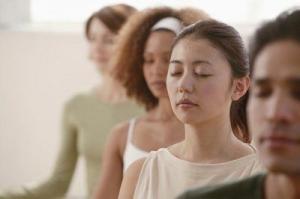 Some 30 minutes of meditation daily may improve symptoms of anxiety and depression, a new Johns Hopkins analysis of previously published research suggests.

“A lot of people use meditation, but it’s not a practice considered part of mainstream medical therapy for anything,” says Madhav Goyal, M.D., M.P.H., an assistant professor in the Division of General Internal Medicine at the Johns Hopkins University School of Medicine and leader of a study published online Jan. 6 in JAMA Internal Medicine. “But in our study, meditation appeared to provide as much relief from some anxiety and depression symptoms as what other studies have found from antidepressants.” These patients did not typically have full-blown anxiety or depression.

The researchers evaluated the degree to which those symptoms changed in people who had a variety of medical conditions, such as insomnia or fibromyalgia, although only a minority had been diagnosed with a mental illness.

Goyal and his colleagues found that so-called “mindfulness meditation” — a form of Buddhist self-awareness designed to focus precise, nonjudgmental attention to the moment at hand — also showed promise in alleviating some pain symptoms as well as stress. The findings held even as the researchers controlled for the possibility of the placebo effect, in which subjects in a study feel better even if they receive no active treatment because they perceive they are getting help for what ails them.

To conduct their review, the investigators focused on 47 clinical trials performed through June 2013 among 3,515 participants that involved meditation and various mental and physical health issues, including depression, anxiety, stress, insomnia, substance use, diabetes, heart disease, cancer and chronic pain. They found moderate evidence of improvement in symptoms of anxiety, depression and pain after participants underwent what was typically an eight-week training program in mindfulness meditation. They discovered low evidence of improvement in stress and quality of life. There was not enough information to determine whether other areas could be improved by meditation. In the studies that followed participants for six months, the improvements typically continued.

They also found no harm came from meditation.