Awesome New York Times article on the measurable changes in the brain that come from long-term meditation. — Michael 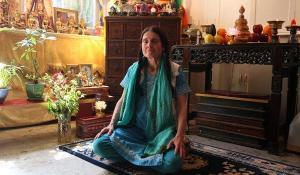 The role that meditation plays in brain development has been the subject of several theories and a number of studies. One of them, conducted at the Laboratory of Neuro Imaging at the University of California, Los Angeles, found that long-term meditators like Ms. Splain had greater gyrification — a term that describes the folding of the cerebral cortex, the outermost part of the brain.

Published in the Frontiers in Human Neuroscience journal in February, the study is the latest effort from the U.C.L.A. lab to determine the extent to which meditation may affect neuroplasticity — the ability of the brain to make physiological changes. Previous studies found that the brains of long-term meditators had increased amounts of so-called gray and white matter (the former is believed to be involved in processing information; the latter is thought of as the “wiring” of the brain’s communication system.)

It follows other studies examining possible links between meditation and physical benefits. In 2009, for example, a study presented at an American Heart Association meeting suggested that the mental relaxation produced by meditation has physiological benefits for people with established coronary artery disease.

The U.C.L.A. study, like previous ones, is inconclusive but intriguing. “You could argue that more folds mean more neurons,” said Dr. Eileen Luders, the recent study’s lead author, who practices meditation herself. “These are the processing units of the brain, and so having more might mean that you have greater cognitive capacities.”