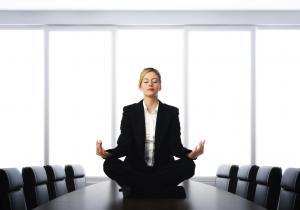 By Zoe Kinias for Insead

It’s a practice rooted in Hinduism and adopted by beatniks seeking spiritual guidance. Now evidence shows meditation can improve business decisions and save your company from expensive investment mistakes.

Meditation has become an increasingly popular practice amongst the C-suite elite. And, with CEOs such as Rupert Murdoch (News Corp NWSA -0.74%); Bill Ford (Ford Motor F -1.27% Company); Rick Goings (Tupperware); and Marc Benioff (Salesforce.com CRM -1.67%) all touting its benefits, executive coaches are picking up on the trend introducing mindful techniques to programs to calm the mind’s “chatter,” assist focus and manage stress. But new empirical evidence suggests it’s more than just a “feel good” exercise, and as little as 15 minutes of meditation can actually help people make better, more profitable decisions, by increasing resistance to the “sunk cost bias.”

The sunk cost bias–also known as the sunk cost fallacy, or the sunk cost effect–is recognized as one of the most destructive cognitive biases affecting organizations today. Put simply, it’s the tendency to continue an endeavor once an investment has been made in an attempt to recoup or justify “sunk” irrecoverable costs. The phenomenon is not new; psychological scientists have been studying the “escalation of commitment” since the mid-1970s, noting its ability to distort rational thought and skew effective decision-making. Often, it’s a subconscious action, which can result in millions of dollars being invested into a project, not because it’s a sound investment but because millions of dollars have already been spent.

But it’s a mind trap you can avoid as suggested by the paper Debiasing the Mind Through Meditation: Mindfulness and the Sunk Cost Bias by Andrew Hafenbrack, INSEAD PhD student in Organizational Behavior, Zoe Kinias, INSEAD Assistant Professor of Organizational Behavior and Sigal Barsade, the Joseph Frank Bernstein Professor of Management at The Wharton School. Their research shows just 15 minutes of mindfulness meditation– such as concentrating on breathing or doing a body scan–helps raise resistance to this problematic decision process, and open the way to more rational thinking.

“Prior research shows the more we invest in something (financially, emotionally, or otherwise), the harder it is to give up that investment and the more inclined we are to escalate a commitment,” Hafenbrack notes. “In many cases negative emotions; fear, anxiety, regret, even guilt or worry over past decisions, subconsciously play a part in the decision-making process.”

Most noted examples include the U.S. military campaigns in Vietnam in the 1960s, and more recently in the Middle East, when mounting casualties made it increasingly difficult for the U.S. government to withdraw. On the business front, companies regularly fall victim to the bias when faced with decisions on whether to pump money into a product after being scooped by a competitor, or to continue an investment as costs skyrocket beyond initial estimates. Sometimes, it’s a matter of a product just not selling as well as expected, as was the case with the Concorde supersonic jet when France and Britain continued their investment long after it was known the aircraft was going to be unprofitable.

The sunk cost bias can also be exacerbated by anticipated regret, the result of thinking too much about what may, or may not, occur in the future.

It is the result, says Kinias, of both emotional and temporal processes. MRI brain scans show the mind’s natural state constantly jumps around, flicking between ideas, switching from the past to the future to the present in seconds. Through a series of studies, Hafenbrack, Kinias and Barsade hypothesized, and found that mindfulness meditation, by focusing on the present, quiets this mind-wandering process, diminishing the negative feelings that distort thinking, thereby boosting resistance to the sunk cost bias.