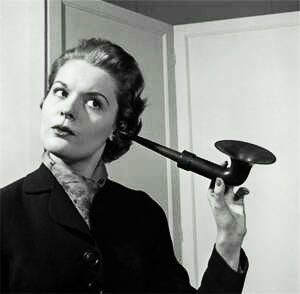 You’re having complex feelings about the things that happened with your partner yesterday. You feel upset and confused, there’s so much going on.

You meet your friend at a coffee shop, hoping to talk about some of this. But as soon as you start, she digs out her iPhone and starts rubbing and poking the glass. “Uh-huh, uh-huh,” she says as you start unpacking the details, your heart sinking. Still, you soldier on, and eventually she puts the device away and actually makes eye contact. That’s almost worse. Watching her eyes, you can see her flipping through a rolodex of responses as you speak. “You have to stand up for yourself,” she interjects. It’s obviously a stock line. It makes you wonder if anyone, anywhere is capable of just listening. It might be time to pay for a therapy session.

Learning to listen effectively is a powerful way to build concentration, and concentration will help you to listen much better. Most people will talk more or less continuously, and are thinking of what they are going to say while pretending to listen to others. “Conversation” becomes a war of clever soundbites, delivered with little interest in what others are saying. Most people in conversation will have some remark locked and loaded, ready to fire, just waiting for a pause in the other person’s remarks. Then they switch roles, each jumping instantly into the silence, and filling it with speech.

If you listen for a few minutes to two people talking like this, you will notice several features about the conversation. First, there is never any silence. Second, because there is no silence, the conversationalists are never actually taking in what each other is saying. Third, since they aren’t taking it in, they aren’t really thinking about it or responding to what’s being said in a meaningful way. The conversation skates along on the shallowest possible level, a mere robotic duel of rote verbal reactions triggering more rote verbal reactions. Conversations like this are extremely tiring. They contain no food for the brain or heart; the verbal equivalent of junk food—empty, unsatisfying, and ultimately bad for you.

Learning to listen means learning to actually pay attention to—to concentrate on—what other people are saying. Listening to their words as if listening to a favorite song, with your mind focused on what they are saying and what it means. Concentrated listening is also called “active listening” or “deep listening.” Deep listening gives greatly increased concentration, enjoyment of music as well as other humans, and—perhaps most importantly—a profoundly positive shift in the quality of relationships.

Listening with concentration can be called active listening because we are not just passively allowing speech to enter our ears, but instead are bringing as much of our listening capacity into the act as possible. Our ears become hungry for the words they are listening to, and chew the words as finely as possible before digesting them.

The first step in learning to listen is to learn to be quiet. Make a friend of silence. This can be difficult because nobody wants to be thought of as dull. There is a natural desire to respond quickly, and to be seen as interesting and smart. But if you resist this urge even a little bit, a new thing can begin to happen.

Try this experiment: When talking with someone, play a mental game of waiting one full second before responding to anything they have said. That’s it, just one second of silence, no matter what you’re talking about. This is a long, long time in a normal conversation. During this second of silence, don’t think about what you are going to say, think about what the other person has just said. Give it one long, delicious second of your full attention. Then respond, saying whatever it is you have to say. Make sure to maintain eye contact so that they know you’re listening to what they’re saying and considering it.

You will be surprised what a big difference this little game makes. By actually giving the other person’s words a moment to sink in before you respond, your connection with that person, the depth of your conversation, will be very noticeable. Because humans love to be heard, the speaker will begin to say things and respond in ways that are very positive. But the biggest changes will be in you. You will feel yourself opening to the person in a new way. Even if you strongly dislike their ideas, you will begin to open to the person emotionally, and feel into their humanness. It’s a powerful feeling, one that immediately begins to relieve our chronic condition of existential isolation.

You will actually feel smarter and more concentrated. Your mind is doing one thing at a time: listening when it’s time to listen, and responding when it’s time to respond. Thinking of your response while trying to listen is juggling, and causes you to lose a lot of brainpower to the juggling overhead. If everything you are saying to each other can be said with no actual reflection, then it’s probably not that worth saying anyway.

As you learn to do this, try to listen more deeply while they are speaking. Dedicate the entire time they are speaking to actually hearing their words, not listening to your own mental reaction to them. If you practice this enough, not only will your concentration power begin to get quite strong, but you will have some of the best conversations you’ve ever had. And others will begin to slow down and listen to you as well.

Want to connect with people? Want to really understand where people are at and what’s going on? Let some silence happen and make a practice of deep listening.

Learn all about how to concentrate

4 thoughts on “Learning to Listen”