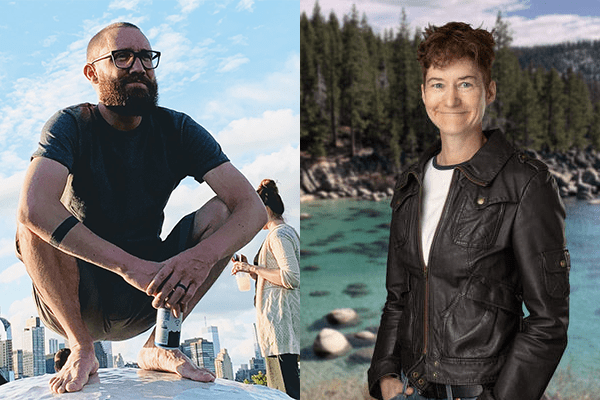 Host Michael Taft speaks with Rin’dzin Pamo and Jared Janes about their new project, entitled “Evolving Ground,” which is a community of practitioners that seeks to reinterpret and revitalize Vajrayana practice in a contemporary Western context. Topics include: the failure of Tibetan Buddhism to adapt to Western culture, the importance of the worldview in practice, creating new language around meditation, cheese-filled dorje snacks, and much more.

Rin’dzin Pamo is a British born Vajrayana practitioner living in the US. They were an apprentice in the Aro gTér tradition of Tibetan Buddhism for twenty years and are an experienced Dzogchen meditator and mentor. Rin’dzin received the London School of Economics Fei Xiaotong prize for their Masters research on the Chinese tech industry. They worked on international development projects in India, Africa and the Middle East and as a program director for Amnesty International.

Jared Janes is an American-born yogic practitioner living in Denver, Colorado. His early practice was influenced by pragmatic dharma, Unified Mindfulness, and The Mind Illuminated book. With the help of Rin’dzin, he transitioned into Vajrayana-inspired practice in early 2019. Jared’s career started in digital operations and management and he’s now a full-time consultant and podcast producer.