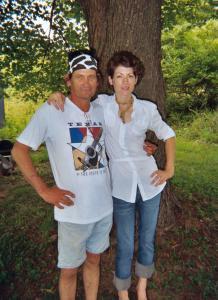 My meditation practice has helped me with all kinds of things. I don’t lose my keys as often. I don’t have meaningless sex with strangers. I don’t wake up with bits of teeth in my mouth from grinding them. My sisters enjoy my company. I usually don’t eat foods that make me feel sick, even if they taste really good. There is an endless list, but if I had to name the top benefit so far, it would be my relationship with my dad and my experience with his death.

The day my father called and told me he had cancer, I screamed at him. I’m not even sure what I said. Looking back, it seems like I was in a huge storm of angry thoughts, feelings, and words. An emotional blackout.

My father was quite drunk when he said the words “I have cancer” to me that first time. This was nothing new: my dad was an alcoholic. He had been drunk or high for most of his life. By the time I was fourteen, he had gotten three DUIs, had been in rehab, and had done fourteen days in the slammer. He had also come to all of my plays and recitals drunk, spent holidays and birthdays drunk, and on many occasions had taken my sisters and I on some pretty wild car rides. 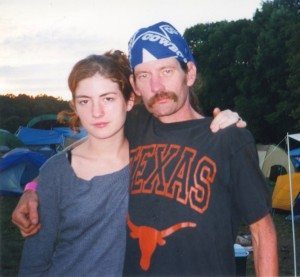 In my early teens, I became his wingman. We had a great time. We waited in line overnight for Grateful Dead tickets, went to music festivals, took road trips, looked up at the night sky and talked about aliens and alternate universes, had parties and got high and made funny faces at each other. Aside from the obviously messed-up dynamic, we shared a very deep connection. We’d always say we had ESP with each other.

By the time I hit my twenties, I recognized how inappropriate and dysfunctional our relationship was, and I started to break away. It was a difficult time; my dad was losing his favorite drinking buddy, and I was realizing that I’d never really had a father. In my mid-twenties, he was diagnosed with Hepatitis C. While he was in treatment for that, he stopped drinking, gained some weight, got new teeth, and started taking a genuine interest in my life. Once he got a clean bill of health, however, everything went downhill again. My disappointment was huge. It took me right back to being twelve when he fell off the wagon after several months of sobriety. Ouch. Soon after that I moved to Los Angeles, putting 3000 miles between us. By then, I was carrying so much sadness and anger that I was unable to feel much compassion when he called  to tell me he had cancer.

The first few years of my dad’s cancer were tough for both of us. I was convinced that I could do or say the right thing to save him. I tried everything, and nothing worked. The doctors told him that if he quit drinking and smoking, he would most likely beat it, but that was not an option for my dad. He drank and smoked until the end. When he could no longer swallow, he put beer into his feeding tube. You have to hand it to him—the man was dedicated. He was determined to stay asleep.

I, on the other hand, was in the process of waking up.  I was in therapy, active in recovery groups, and starting to dip my toes into meditation. But it wasn’t until I began a daily practice that things really began to change.

Prior to that, I had a very hard time being around my father. I really wanted to make the most of what time we had, but whenever I went back east to visit, within thirty minutes of being with him, I’d be entering that blackout. My body would lock up and my mind would fill with panicked static. I’d yell at him, dumping my pain and frustration out on a man dying of cancer, who I desperately wanted to treat with love and care. I couldn’t help it. To keep this from happening, I tried limiting my visits to half-hour sessions. Soon I wasn’t talking to him at all. I stopped reaching out. I told people that I said my goodbyes and wasn’t going back until the funeral. My sisters cared for him without me and I went about my life in LA. It was heartbreaking. As flawed as he was, I loved him deeply; I just didn’t know how to let thoughts and feelings arise without acting on them. I had no equanimity.

After less than a year of meditating daily and one seven-day retreat, all this changed. I found that not only could I be around my father (who by that point looked like the walking dead), I felt energized instead of depleted after seeing him. The clarity and concentration that came from mindfulness fueled me and my capacity for equanimity increased. I brought the practice into life.

I became a big support for my father.  I was able to love and accept him just as he was. I stopped trying to change him or the situation, and instead opened up to what was. I began to view my emotional states as impermanent.  The story about what kind of father he was started to fall away. The words and images became fluid. The anger was a wave of heat and contraction. The sadness was heaviness in the chest and around the eyes. When I took the experience apart in that way, there was no emotional blackout. I didn’t find myself saying and doing things I later regretted.

In the winter of 2009, my mother and my stepfather invited my dad to die at their house. I left California and moved in for a few months to help care for him. That spring I spent every day with him, and was with him when he took his last breath.

Helping my dad die was by far the most amazing and transformative time of my life. I know that without meditation, I never would have been available for the experience. I’m not saying that meditation took away the hurt and disappointments of my relationship with my dad. But it did change the way I see and experience the hurt and disappointment. I stopped suffering and became capable of being the daughter I wanted to be.

Read the the full Dying with Dad Series

4 thoughts on “Dying With Dad”