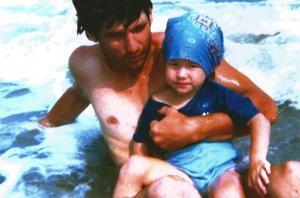 One of the perks of meditation is that it instills compassion in the practitioner. True compassion comes from a place free of expectation, need, or neuroses. It isn’t personal in the sense that I once thought. Compassion comes from a very expanded perspective; it’s not limited to Me and the story of what it means to be a compassionate person. Some of the most compassionate people I have met are not exactly warm and loving in the way you might imagine. Their compassion extends past the personal, to a more universal place. When I cared for my father in the last months of his life, the compassion I felt for him was less personal and more universal than I had ever experienced. This is what made it possible for me to be one of his caretakers without suffering greatly.

I had acted as my father’s caretaker previously. The first time that comes to mind is Christmas Eve when I was six. I was wide-awake in our family bed, hoping to hear the reindeers’ hooves on our roof, when my mom tried to wake up my dad. I realized then that Christmas was not what it seemed. My mom couldn’t wake my dad and so she went downstairs without him. Something told me that he might be disappointed if he wasn’t part of what was happening below. Or, that he might get in trouble with my mom if he was a no-show. Because of my dad’s drinking, it was quite a challenge to wake him once he was asleep. I didn’t take any chances. I kicked him, with all my six year old might, in the leg. Mumbling and grumbling, he woke up. Soon he was downstairs with my mom, eating the chips and salsa that my sisters and I had left out for Santa. The feeling of knowing I had taken care of my dad overrode the stark realization that there would be no reindeer hooves, and I finally fell asleep.

There are many more stories about how I took care of my dad. The highlights include: Putting out a small fire on the motel carpet, after he had passed out with a lit cigarette in his hand; sitting with him late into the night while he listened to John Lennon and cried; picking him up off the kitchen floor and dragging him to the couch and covering him with a caftan; and lots of advice sessions on how to improve his relationships with my sisters.

My dad took care of me too, in the ways that he could. He sent me lots of care packages that included cash when I moved to LA. I still have stacks of “just because” cards that he mailed me over the years. He always had a small gift for me when I saw him and took me on many trips and to concerts. He nursed me through innumerable terrible hangovers with ginger ale and Campbell’s chicken and rice soup (he also always offered “hair of the dog”!).

All of my caretaking came from my need to fix him. If I could fix him, maybe he could become the dad I wanted. He wasn’t the only fixer-upper I had, just the first. I had many boyfriends and girlfriends who filled the same need for me. Eventually I realized that I was just recreating a pattern and hoping that it would turn out differently this time. That insight was a real game changer. It took time, support, and a lot of meditation to really put that realization into action, but I’m happy to report that I’m not interested in saving anyone anymore. By the time my dad was in his final months I was in good emotional and spiritual shape to be a compassionate caretaker, without falling into my old ways. That doesn’t mean that I always did that perfectly, or that I never took anything personally. But my practice helped me to be gentle and non-judgmental with myself, and to get unstuck when things got sticky.

On the last full day of my dad’s life things got a little sticky. A new home health aide came to the house. She was clearly uncomfortable and unprepared. By this time, my dad wasn’t communicating very much and his eyes were starting to set in a glazed, fixed stare—a sign of impending death. I had hoped that the health aide would be able to give him a sponge bath and change his sheets. She had forgotten her latex gloves, a must for patient contact, and told me that she wouldn’t be able to bathe him after all. I asked her to help me move him to his wheelchair so that I could bathe him myself and change the sheets. She obliged, but accidentally banged him arm on the metal chair. He cried out and his skin, which had become paper-thin, began to bleed.

I was beginning to border on a freak-out. I felt angry with this woman and my voice showed it. I did what my meditation practice had taught me to do: I relaxed my body, took a few deep breaths, and allowed the thoughts and sensations of emotion arise and pass. Then I asked her to leave. I certainly didn’t want to be a jerk to this woman who had not intended to do any harm. I was also about to start crying and her shoulder wasn’t my top pick.

My dad was becoming agitated and the cut on his arm was bleeding though the bandage I had put on. I knew that his hours were numbered and seeing him in any pain at all really upset me. I felt helpless and afraid. I had been caring for him over the last month, but at that moment it seemed to me that I was not up to the task. The enormity of the previous months started to press down on me and I felt tiny and incapable of moving forward. I wanted to curl up in a ball and cry. I wanted someone to wrap me up in blankets and put me to bed.

But it wasn’t time for me to break down, it was time for me to take care of my father. Big angry tears streamed down my face as a told him that I would get him clean. He couldn’t sit up on his own in the wheelchair and so I decided to move him to the recliner next to his bed. As I allowed my tears to flow, the anger and fear evaporated and a feeling of calm came over me. I continued to cry and my tears fell on my dad’s body as I lifted his emaciated body from the wheelchair. I carried him like a baby in my arms, as my tears dripped onto his neck and shoulder. The tears no longer came from sadness or anger. Instead they seemed to come from a less personal place, a place that was open and free.

The sadness, fear, and anger had transmuted into a deep feeling of love and kindness. I didn’t recognize the significance of this until later when I recounted the story to my teacher, Shinzen Young. Compassion can be born out of challenging emotions and show up when you least expect it. Only moments before I was at my wits end, and then instead of being swallowed up by grief and anguish, I was given access to a kind compassion that gave me energy and freedom

I got my dad to the recliner and slowly cleaned his body with warm soapy water. The tears fell and mixed with the water. He made small sounds and his body relaxed. When he was clean and dry, I dressed him, carried him back to his freshly made bed, and covered him with blankets.

I am so grateful for that experience. Not only the release from suffering that occurred, but also the simple beauty of cleansing my dad’s body. That was some of the last psychical caretaking I did for my dad. It came from a part of me that was free of expectation and wasn’t trying to fix him. It opened me up to be even more present with him in his final hours.

Caretaking can be complicated. It’s necessary to come from a place of compassion and openness if you want to avoid needless suffering. That may mean some deep work around the “Caretaker Ego.” Exploring why you want to help others, and what you hope to get out of it, can free you up to be truly selfless in your caretaking. The kind of compassion that can come from a meditation practice makes you available to offer care that transcends personal motives and concerns, and transmutes suffering into love and kindness. Meditation helped me to unpack years of emotional baggage about taking care of my dad. Because of this I was able to take care of him when it really mattered.