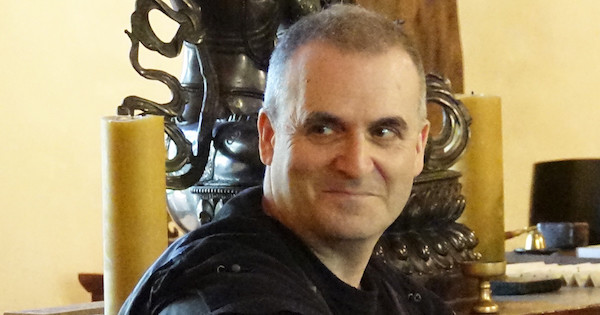 In this episode, philosopher, author, and meditator, Evan Thompson speaks with host Michael Taft. Topics include: the meaning of awakening; lucid dreaming and noticing the construction of the waking state; the 3-fold structure of Awareness, Contents of Awareness, and then Identification with Contents; the cosmopolitanism of Buddhism, and the myth of Buddhist exceptionalism; consciousness hacking and psychedelics; and much more.

Evan Thompson, PhD, works on the nature of the mind, the self, and human experience. His work combines cognitive science, philosophy of mind, phenomenology, and cross-cultural philosophy, especially in Asian traditions. His most recent book, Waking, Dreaming, Being, examines the self and consciousness in neuroscience, meditation, and philosophy.

8:50 – Phenomenal sense of insight into waking up, false awakening.

11:40 – Is waking up a recurring process as in the ordinary sleep-wake cycle?

15:10 – Awakening as metaphorical concept and not a state. Ethics, values tied to awakening.

17:15 – Embodied nature of consciousness and awakening.

23:35 – Meditation is not first person science, more similar to dance and martial arts.

28:25 – Basic structure of Waking, Dreaming, Being based on Upanishads.

29:05 – Unpacking the Upanishadic structure in the context of meditation.

33:45 – Lucid dreaming for cultivating awareness rather than dream control.

37:45 – Connection between framing of dream and waking states.

38:50 – Consciousness versus contents of consciousness. Sense of self while awake, dreaming.

43:25 – Neuroscience of self and memory while dreaming.

45:30 – Neuroscience of self and memory while awake.

46:20 – Brain as active while asleep as awake, but in different local and network ways.

48:00 – Sleep needed for memory consolidation, learning and self regulation.

49:35 – Meditation not only limited to brain but an activity practiced in a social context.

53:05 – Meditation embodied in a wider context that may be missed in brain only fMRI scans.

55:40 – Wings needed for flight but flight is not in the wings, brain needed for meditation …

56:55 – Meditation reduced to neuroscience correlates may be too reductionist.

1:00:35 – Buddhism is a religion despite claims to the contrary, a lot of Buddhist exceptionalism.

1:10:05 – Unbalanced approach to psychedelics. Consciousness hacking as fear of death.

Support the creation of future episodes of this podcast by contributing through Patreon.