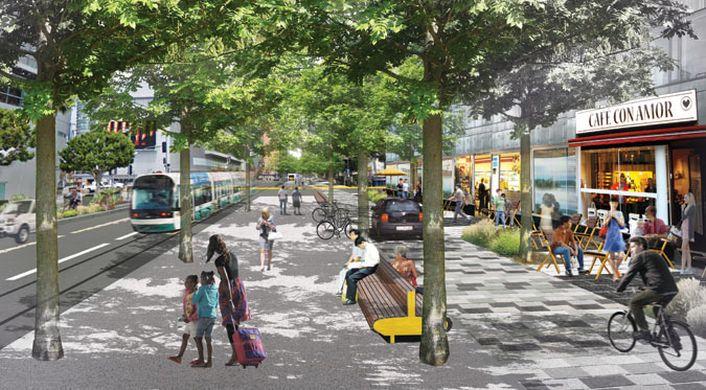 What I found stifling about Western Buddhist practice is the obsessive focus on meditation as the paramount practice. What is completely lacking in modern Buddhist communities is a culture that is creative and productive, that grows and transforms, that generates new cultural forms, new ways of life. The singular focus on meditation becomes, as Vince Horn called it, ‘the meditation-industrial complex.” Meditation becomes the singular “product” that is then packaged, priced and sold through various consumer outlets: retreat centers, websites, smartphone apps and online courses. I find this to be not only boring but deadening, absolutely lacking any interest or vitality. Once you learn how to meditate, you’re just about done with Western Buddhism. The Secular Buddhists have proven this. Modern Buddhism has become the worst kind of monoculture.

This brings to mind a monoculture of another kind: the automobile. Modern cities and societies have been designed around one dominant form of transportation: the private car. Cities streets grew to enormous widths to serve an ever-growing flow of cars, often with only one occupant, the driver. These huge streets, or “traffic sewers” as traffic engineers call them, took space away from walkers and bicyclists, from beautiful parks and trees. Huge car parks were built ten or more stories high to corral all the cars, which sat in the garages for hours, empty. Parking spaces proliferated all over the city, taking space away from outdoor cafes and street vendors, space that would have been places for people to congregate and socialize. What was worse, the car-dominated city nearly killed public transportation, buses, subways and commuter rails. By displacing public transport, it made the use of public transportation a dreadful experience: slow, under-deployed and expensive. The loss of public transportation and the domination of the car caused such toxic air pollution in cities that it is dangerous to walk outside without a face mask. The car monoculture is one of the major contributors to our ever-increasing carbon emissions and global warming. The car monoculture drove the building of super highways that destroyed landscapes and habitats for all other species of animals. The domination of the car produced the suburbs, a vast expanse of mass-produced, lonely, ugly places devoid of meaningful social contact, a mind-numbing dreariness punctuated only by trips to the mall. The monoculture of the car destroyed the diversity of culture, reducing it all to the private experience of one person, sitting in a car, listening to the program of her choice on streaming media, completely sealed within a climate controlled environment, isolated and alone.

[Note: If this sounds vaguely familiar, perhaps it’s because meditation as a monoculture has a similar effect.]

To stop the proliferation of the car monoculture and bring life back to the city streets, people started a movement called Complete Streets. The idea is to design streets so as to restrict the space given to cars and expand the space given to all other forms of transportation and social contact. Cars are reduced to one lane in each direction. A second lane is dedicated to public transport—buses and trains— to improve its speed and efficiency and reduce costs. The rest of the road is designed to promote walking, cycling, street vendors and cafes, socializing, play and performance spaces, parks, trees and art. Parking is removed to provide more space for all other uses. Car parks become retail shops, office spaces and apartments where people shop, work and live.

I’d like to propose that we stop the propagation of meditation as a monoculture and start a creating a Buddhism that is a Complete Culture. Great religions produce great cultures. With its inherent affinity to science, humanism and the environment, Buddhism is a great religion that could produce a great culture, if we do the work of creating it. Great culture doesn’t just ‘happen’, we have to make it happen.

The connection of culture to dharma could be subsumed under Right Livelihood. I propose that instead of putting all our focus on promoting meditation as a way to relieve the stress and trauma of life under Neo-Liberal Capitalism, we could instead create a culture of awakening that causes less stress to begin with, that provides more joy and more meaningful human connection. Instead of numbing out with mass media consumption, we could work on creating a meaningful culture that would provide personal, social and spiritual fulfillment.

A complete culture would be one that is produced by its members, not just consumed from an online dharma site. It would require active participation and production by the whole community, from all ages and ethnicities, from margin to centre. A complete culture would naturally generate a political culture that would support collective political action. I contend that one of the reasons that Buddhism in the West is not politically active is because it doesn’t have the kind of shared culture that supports political action. It’s a religion of strangers who otherwise have no real connection to each other, save for sitting in silence in a shrine room.

A complete culture would not only preserve its historical lineages and cultures of the past, but would push the frontiers of the avant garde, producing innovative and futuristic works. A complete culture is a living culture that constantly adapts and pushes its growing edge.

At Queer Dharma Circle (in Ware MA), we started with the approach that our primary Buddhist practice is cultural creation. We shape our unique and collective spirituality through the expressive arts, including visual arts, ritual, dance and music.

I hope that in the future Western Buddhism stops building four lane highways that are designed for only one vehicle of awakening, the meditation experience. Reduce those four lanes to two, and use the other two lanes, the sidewalks and car parks (retreat centers) for all the other vehicles of awakening: arts, sciences and humanities, the whole human experience.

Shaun Bartone is the editor of Engage! blog at engagedbuddhism.net. He has 30 years experience in community organizing in the area of human rights, urban development, labor, economic, and environmental justice. Shaun has been practicing meditation and studying Buddhism for ten years, primarily in the Theravada tradition, integrating insights from dharma and meditation with his experience in social change. Shaun is the spiritual director of Queer Dharma Circle at Bird Hill Farm in Ware, MA, a multi-lineage dharma program for queer and trans people.

8 thoughts on “Buddhism as Complete Culture”