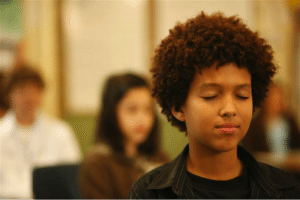 By Rob Kuznia for The Daily Breeze

But now, thanks to an elective class the sixth-grader is taking at Hermosa Valley School, instead of yelling at his brothers when they get loud and or overly silly, he walks into his room, shuts the door and focuses on his breathing.

Called “mastermind,” the class is a new elective for sixth-graders that blends some of the tenets of yoga and meditation with the science of the brain. The idea is to teach students to manage stress, improve focus, build empathy, be optimistic — above all, to live in the moment. The umbrella term used to describe these concepts is “mindfulness.”

The class is part of a larger program taught in Hermosa Beach and Redondo Beach called MindUP. The curriculum centers on 15 lessons based in neuroscience that explain how chemicals released in the brain can trigger anxiety, fear and other emotions that, with proper training, can be regulated.

On Friday, Erin Infusio’s class at Hermosa Valley School began as it always does — with the ding of a digital chime that gradually faded into silence. For two full minutes, the students sat still and focused on their breathing.

During this exercise, the room grew so silent that the click of the shutter on a photographer’s camera was conspicuous.

Afterward, Infusio led the students on a matter-of-fact discussion of how it felt to do the exercise with two visitors present — all for the purpose of gaining an awareness of their own thoughts and feelings.

“We sort of know that they are watching us, they’re taking pictures, and so it’s very hard to not let all of our thoughts totally take over,” she said. “But it’s when we practice in times that it’s difficult that it really makes us get better at that focus — on ourselves, rather than external distractions.”

The MindUP program has had a presence in Hermosa Beach’s elementary schools since 2011, when a pilot version was launched for grades kindergarten through second grade. It has since expanded to the older grades in Hermosa, as well as to Redondo Beach’s eight elementary schools and a middle school, Parras.